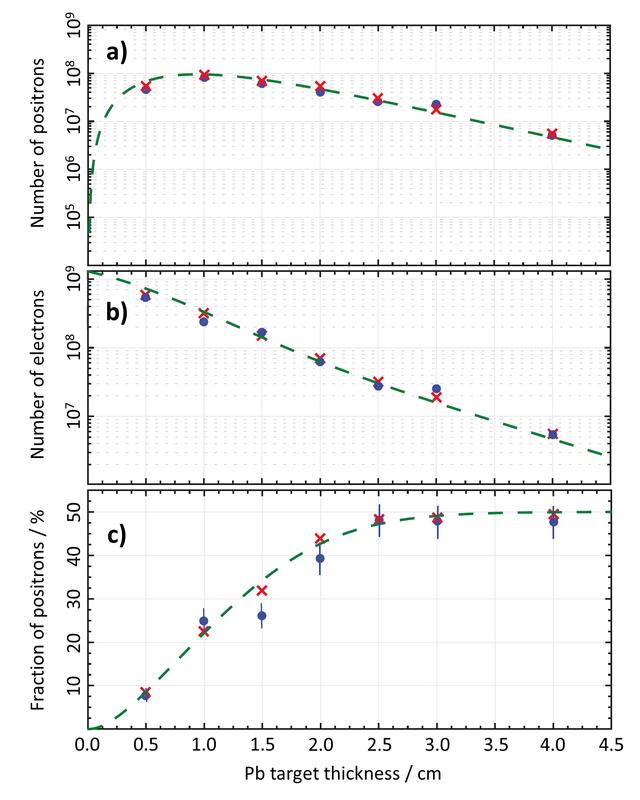 Fig. 1: Experiment vs. theory for electron (a) and positron (b) yield and positron percentage (c). Blue: exp data; red: FLUKA simulation; green: analytical model, scaled by 0.75 in (a) and (b). Queen's University Belfast / MPIK

Now, an experimental group from the Queen's University of Belfast in strong collaboration with the Quantum Dynamics Theory Division of the Max Planck Institute for Nuclear Physics has generated a novel form of plasma, exclusively made of electrons and their antimatter counterpart (positrons) in the laboratory [Nature Communications 23.04.2015].

The positron is the antiparticle of the electron which shares with the latter all properties except the charge having opposite sign. Electron-positron plasmas are emitted as ultra-relativistic jets in different astrophysical scenarios under extreme conditions, like during gamma-ray bursts.

Thus, they represent a unique tool to test physics in so far unexplored regimes also providing deeper insights about the early stages of the Universe. The feasibility of generating such a unique state of matter in a terrestrial laboratory would then open the possibility of scrutinizing such phenomena and regimes under controlled conditions.

This goal has been now achieved by an experimental team led by Dr. Gianluca Sarri and Prof. Matthew Zepf from the Queen's University of Belfast in strong collaboration with Antonino Di Piazza and Christoph H. Keitel from the Division for Theoretical Quantum Dynamics of the Max Planck Institute for Nuclear Physics in Heidelberg.

The experiment has been performed at the Astra Gemini laser facility at the Rutherford Appleton Laboratory, Oxford, United Kingdom. An ultra-relativistic electron beam, generated in an all-optical setup via laser wake-field acceleration, hit a Pb solid target. As a consequence of the complex interaction of the electron beam with the nuclei and the electrons in the target, an ultra-relativistic electron-positron bunch was observed on the rear side of the solid target, with a fraction of electrons and positrons depending on the target thickness (see Fig. 1).

The density of the bunch was found to be sufficiently high that its skin-depth resulted smaller than the bunch transverse size, allowing for collective, i.e., plasma effects. “Our main task”, says Antonino Di Piazza, the first theory author of the publication, “was to identify the main mechanism responsible of the production of the electron-positron bunch and to describe its formation and evolution inside the solid target in the most concise and simple way, in order to shed light on the underlying physics”.

The result is a surprisingly simple model, which, among all possible interactions occurring inside the solid target, includes only two fundamental quantum electrodynamical processes: 1) bremsstrahlung by electrons and positrons, and 2) electron-positron pair production by photons, both occurring in the presence of the screened electromagnetic field of the solid target atomic nuclei. Analytical estimations and numerical integrations of the corresponding kinetic equations agree very well with the experimental results on the relative population of electrons and positrons in the generated beam (see in particular the blue dots and the green dashed line in part c of the Fig. 1).

Absolute electron and positron yields were also well predicted by the model. In order to reproduce theoretically also more detailed features of the experimental results, Gianluca Sarri has employed the available fully integrated particle physics Monte-Carlo simulation code FLUKA (red dots in Fig. 1), which among others also includes the electron-electron and electron-positron interactions, atomic scattering and other breaking mechanisms together with high-energy processes like production of muon-antimuon pairs (the next heavier relatives of electrons/positrons among the elementary particles). Those mechanisms reduce the yield compared to the analytical model by about 25%.