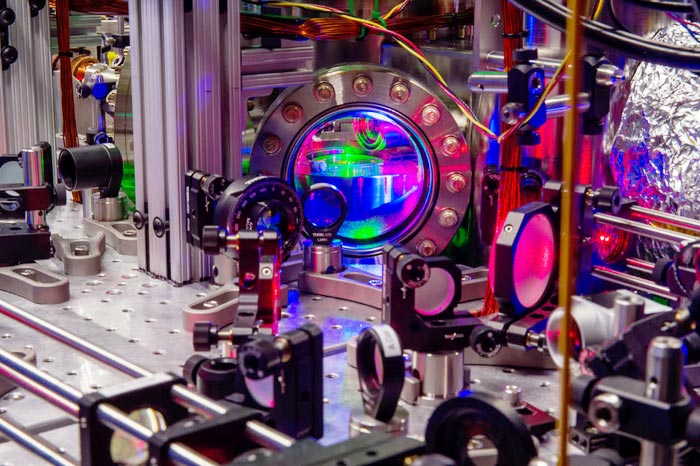 Physicists answer a decades-old question about interacting quantum particles in a disordered system.

Physicists at UC Santa Barbara and the University of Maryland, and also at the University of Washington have found an answer to the longstanding physics question: How do interparticle interactions affect dynamical localization?

“It’s a really old question inherited from condensed matter physics,” said David Weld, an experimental physicist at UCSB with specialties in ultracold atomic physics and quantum simulation. The question falls into the category of ‘many-body’ physics, which interrogates the physical properties of a quantum system with multiple interacting parts. While many-body problems have been a matter of research and debate for decades, the complexity of these systems, with quantum behaviors such as superposition and entanglement, lead to multitudes of possibilities, making it impossible to solve through calculation alone. “Many aspects of the problem are beyond the reach of modern computers,” Weld added.

Fortunately, this problem was not beyond the reach of an experiment that involves ultracold lithium atoms and lasers. So, what emerges when you introduce interaction in a disordered, chaotic quantum system? A “weird quantum state,” according to Weld. “It’s a state which is anomalous, with properties which in some sense lie between the classical prediction and the non-interacting quantum prediction.”

The physicists’ results are published in the journal Nature Physics.

‘Something Strange is Going On’

When it comes to strange, counterintuitive behavior, the quantum world does not disappoint. Take for instance a regular pendulum, which would behave exactly how we would expect it to when subjected to pulses of energy.

“If you kick it and shake it up and down every once in a while, a classical pendulum will continuously absorb energy, start to wiggle all over the place and explore the whole parameter space chaotically,” Weld said.

In quantum systems chaos looks different. Instead of movement, disorder can bring particles to a kind of standstill. And while a kicked quantum pendulum or “rotor” might first absorb energy from the kicks — similar to a classical pendulum — with repeated kicks, the system stops absorbing energy and the momentum distribution freezes, in what’s known as a dynamically localized state. This localization is closely analogous to the behavior of a “dirty” electronic solid, in which disorder results in immobile, localized electrons, causing the solid to transition from being a metal, or a conductor (moving electrons), to being an insulator.

While this state of localization has been explored for decades in the context of single, noninteracting particles, what happens in a disordered system with multiple, interacting electrons? Questions like this and related aspects of quantum chaos were on the minds of Weld and his co-author, University of Maryland theorist Victor Galitski, during a discussion several years ago when Galitski was visiting Santa Barbara.

“What Victor raised was the question of what happens if, instead of this pure non-interacting quantum system which is stabilized by interference, you have a bunch of these rotors and they can all bump into and interact with each other,” Weld recalled. “Does the localization persist, or is it destroyed by the interactions?”

“Indeed, it is a very difficult question that relates to foundations of statistical mechanics and the basic notion of ergodicity, whereby most interacting systems eventually thermalize into a universal state,” said Galitski.

Imagine for a moment pouring cold milk into hot coffee. The particles in your cup will, over time and through their interactions, arrange themselves into a uniform, equilibrium state that is neither purely hot coffee or cold milk. This type of behavior — thermalization — was expected of all interacting systems. That is, until about 16 years ago when it was argued that disorder in a quantum system was thought to result in many-body localization (MBL).

“This phenomenon, which was recognized by the Lars Onsager Prize earlier this year, is difficult to rigorously prove theoretically or establish experimentally,” Galitski said.

Weld’s group had the technology and expertise to shed light on the situation, literally. In their lab is a gas of 100,000 ultracold lithium atoms suspended in a standing wave of light. Each atom represents a quantum rotor that can be kicked by laser pulses.

“We can use a tool called a Feshbach resonance to keep the atoms cloaked from each other, or we can make them bounce off each other with arbitrarily strong interactions,” Weld said. With a turn of a knob, the researchers could make the lithium atoms go from line dance to mosh pit and capture their behaviors.

As expected, when the atoms were invisible to each other they took the laser kicking up to a certain point, after which they stopped moving in their dynamically localized state, despite repeated kicks. But when the researchers dialed up the interaction, not only did the localized state diminish, but the system appeared to absorb energy from the repeated kicks, mimicking classical chaotic behavior.

However, Weld pointed out, while the interacting disordered quantum system was absorbing energy, it was doing so at a much slower rate than would a classical system.

“What we’re seeing is something that absorbs energy, but not as well as a classical system can,” he said. “And it seems like the energy is growing roughly with the square root of time instead of linearly with time. So the interactions aren’t making it classical; it’s still a weird quantum state exhibiting anomalous non-localization.”

Weld’s team used a technique called an “echo” in which the kinetic evolution is run forward and then backward to directly measure the way in which interactions destroy time reversibility. This destruction of time reversibility is a key signature of quantum chaos.

“Another way to think about this is to ask: How much memory of the initial state does the system have after some time?” said co-author Roshan Sajjad, a graduate student researcher on the lithium team. In the absence of any perturbations such as stray light or gas collisions, he explained, the system should be able to return to its initial state if the physics is run backward. “In our experiment, we reverse time by reversing the phase of the kicks, ‘undoing’ the effects of the first normal set of kicks,” he said. “Part of our fascination was that different theories had predicted different behaviors on the outcome of this type of interacting setup, but no one had ever done the experiment.”

“The rough idea of chaos is that even though the laws of motion are time-reversible, a many-particle system can be so complicated and sensitive to perturbations that is practically impossible to return to its initial state,” said lead author Alec Cao. The twist was that in an effectively disordered (localized) state, the interactions broke the localization somewhat, even as the system lost its capacity to be time-reversed, he explained

“Naively, you’d expect interactions to ruin time-reversal, but we saw something more interesting: A little bit of interaction actually helps!” Sajjad added. “This was one of the more surprising results of this work.”

Weld and Galitski weren’t the only ones to witness this fuzzy quantum state. University of Washington physicist Subhadeep Gupta and his team ran a complementary experiment at the same time, producing similar results using heavier atoms in a one-dimensional context. That result is published alongside those of UC Santa Barbara’s and University of Maryland’s in Nature Physics.

“The experiments at UW operated in a very difficult physical regime with 25-times-heavier atoms restricted to move in one dimension only, yet also measured weaker-than-linear energy growth from periodic kicking, shedding light on an area where theoretical results have been in conflict,” said Gupta, whose group collaborated with theorist Chuanwei Zhang and his team at the University of Texas in Dallas.

These findings, like many important physics results, open up more questions and pave the way for more quantum chaos experiments, where the coveted link between classical and quantum physics may be uncovered.

“David’s experiment is the first attempt to probe a dynamical version of MBL in a more controlled laboratory setting,” Galitski commented. “While it has not unambiguously resolved the fundamental question one way or another, the data show something strange is going on.”

“How can we understand these results in the context of the very large body of work on many-body localization in condensed matter systems?” Weld asked. “How can we characterize this state of matter? We observe that the system is delocalizing, but not with the expected linear time dependence; what’s going on there? We’re looking forward to future experiments exploring these and other questions.”