Powering a pacemaker with a patient's heartbeat 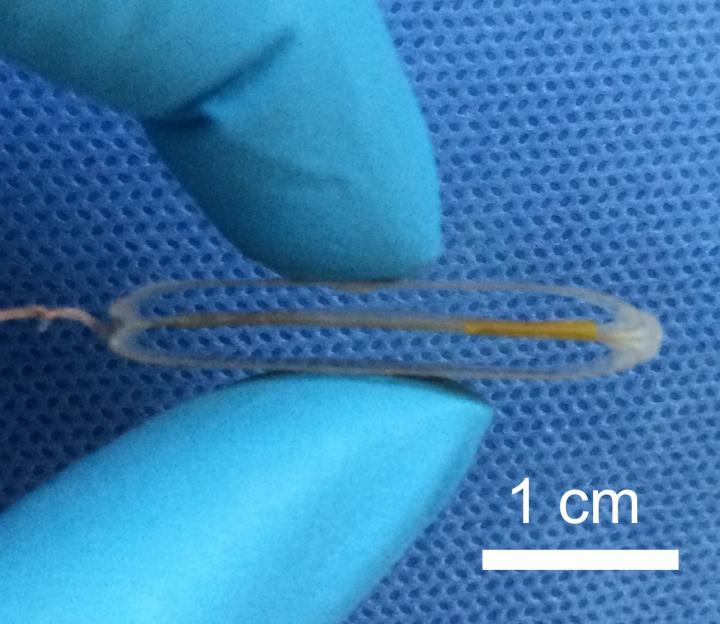 A small, flexible device can power a pacemaker with energy from heartbeats. Credit: American Chemical Society

A conventional pacemaker is implanted just under the skin near the collarbone. Its battery and circuitry generate electrical signals that are delivered to the heart via implanted electrodes.

Because surgery to replace the battery can lead to complications, including infection and bleeding, various researchers have tried to build pacemakers that use the natural energy of heartbeats as an alternative energy source.

However, these experimental devices aren't powerful enough because of their rigid structure, difficulties with miniaturization and other drawbacks, so Hao Zhang, Bin Yang and colleagues searched for ways to improve the technology.

First, they designed a small, flexible plastic frame. Next they bonded the frame to piezoelectric layers, which generate energy when bent.

They implanted the device in pigs and showed that a beating heart could in fact alter the frame's shape, generating enough power to match the performance of a battery-powered pacemaker. The study is a step toward making a self-powered cardiac pacemaker, the researchers say.

The American Chemical Society, the world's largest scientific society, is a not-for-profit organization chartered by the U.S. Congress. ACS is a global leader in providing access to chemistry-related information and research through its multiple databases, peer-reviewed journals and scientific conferences. ACS does not conduct research, but publishes and publicizes peer-reviewed scientific studies. Its main offices are in Washington, D.C., and Columbus, Ohio.