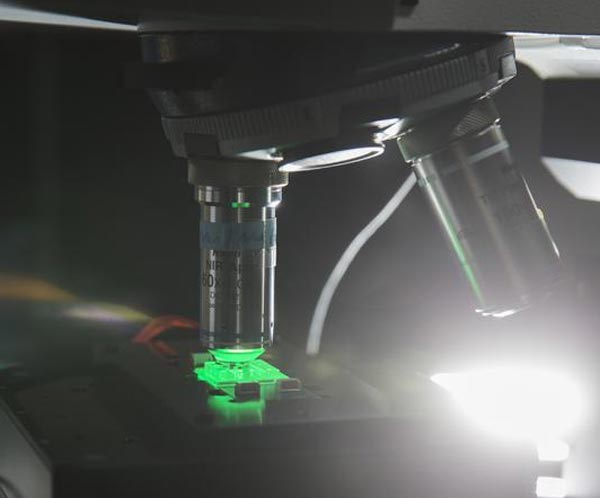 A Raman microspectroscope is used to capture the specific vibrational spectra of bacteria trapped on a chip.
Sven Döring / Leibniz-IPHT

Is the tissue healthy or pathologically altered? Is the antibiotic effective against a certain bacterium or is the bacterium resistant to it? Raman spectroscopy can help to answer such questions quickly and precisely. However, one challenge for the use of the light-based analysis method in everyday clinical practice is that the results can be highly sensitive to the measurement conditions. Approaches to solving this problem are now being provided by a large-scale European cross-laboratory study led by the Leibniz Institute of Photonic Technology (Leibniz IPHT) in Jena.

A decisive step towards common standards and thus a practical application of Raman spectroscopy would be that both researchers and spectrometer manufacturers make data publicly available, recommends the research team. The study was published in the journal Analytical Chemistry.

Raman spectroscopy can be used to precisely characterize biological samples in diagnostics, microbiology, forensics or pharmacology using the unique fingerprint of the molecules. “However, the results also contain other fingerprints: those of the measurement system, for example the Raman spectrometer,” explains PD Dr. Thomas Bocklitz, head of the “Photonic Data Science” research department at Leibniz IPHT. For example, the same sample can lead to different Raman spectra if it is measured with different setups, under different conditions or at different times, says Bocklitz, who also works at Friedrich Schiller University Jena.

To raise awareness of this challenge, 86 researchers from 15 institutions in seven European countries put the comparability of Raman spectroscopic instruments with different configurations to the test. The European Union funded the “Raman4Clinics” initiative, launched by Leibniz IPHT, as a COST (European Cooperation in Science and Technology) Action. „With the largest cross-laboratory study of Raman spectroscopy experiments to date, the study is an important step toward bringing Raman spectroscopy into clinical applications“, says Prof. Jürgen Popp, scientific director of Leibniz IPHT and spokesman for the “Raman4Clinics” consortium.

The “Raman4Clinics” team concludes with a clear recommendation to both spectrometer manufacturers and the scientific community of Raman spectroscopy. “Manufacturers and scientists should calibrate the spectrometer as standard and make the corresponding software modules available open-source,” says Thomas Bocklitz. This, he says, is a viable and attractive first step to correct for the influence of measurement-related effects on Raman signals.

It is also crucial, he says, that both manufacturers and researchers make their data openly available. “We encourage scientists to actively contribute to building larger databases,” Thomas Bocklitz appeals. “This would be an enormously valuable resource for building machine learning models and chemometric methods that are tolerant of undesirable variations.”

After the research team has studied simple substances such as polystyrene and paracetamol, it is now starting to investigate complex biological samples. The results will be incorporated into the National Research Data Infrastructure (NFDI). This networked structure, funded by the German Research Foundation (DFG), is designed to systematically develop, sustainably secure and make accessible the data holdings of science and research. “Our data contribute to achieving uniform standards for Raman spectroscopy,” explains Bocklitz, who is an official contributor (“participant”) in the NFDI’s chemistry consortium (NFDI4Chem). The aim is to get internationally binding protocols for Raman spectroscopy off the ground. “We hope that our study will encourage the scientific community of Raman spectroscopy to commit to such common standards,” Thomas Bocklitz emphasizes. “Only then we can realize the full potential of this powerful non-invasive method for clinical applications.”

Shining a healing light on the brain