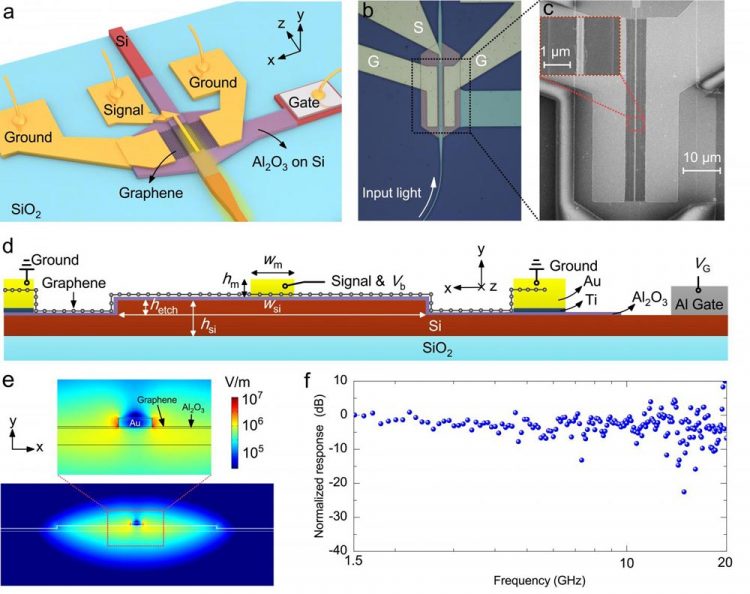 However, the realization of high-performance silicon-based waveguide photodetectors beyond 1.55 μm still faces challenges since there are some fabrication issues as well as wavelength-band limitations.

As an alternative, two-dimensional materials (e.g., graphene) provide a promising solution because of the ability for broad operation wavelength-bands and the advantage of avoiding structure mismatch in the design and fabrication.

In the paper published in Light: Science & Applications, scientists from Zhejiang University and Southeast University in China proposed and demonstrated high-performance waveguide photodetectors beyond 1.55 μm by introducing a novel silicon-graphene hybrid plasmonic waveguide.

In particular, an ultra-thin wide silicon ridge core region with a metal cap atop is introduced to obtain a unique mode field profile, so that light absorption of graphene is enhanced. Furthermore, the fabrication is easy and the graphene-metal contact resistance is reduced, compared to the previous silicon-graphene hybrid waveguides.

For example, the graphene absorption efficiencies are as high as 54.3% and 68.6% for 20 μm-long and 50 μm-long absorption regions, when operating at 1.55 μm and 2 μm, respectively.

In this work, the mechanisms in graphene photodetectors are analyzed carefully, which suggested that the photo-thermoelectric effect is the dominant mechanism for photo-response when operating at zero bias voltage.

When the photodetector operates at non-zero bias voltages, the dominant mechanism becomes the bolometric or photoconductive effect. This comprehensive analysis helps better understand the photocurrent generation in the graphene-metal interfaces.

These scientists summarize the highlights of their work:

“We have proposed and demonstrated high-performance silicon-graphene hybrid plasmonic waveguide photodetectors beyond 1.55 μm. In particular, a novel silicon-graphene hybrid plasmonic waveguide was used by introducing an ultra-thin wide silicon ridge core region with a metal cap atop. The optical modal filed is manipulated in both vertical and horizontal directions.

“In future works, more efforts should be given to introduce some special junction structures to minimize the dark current and further extend the operation wavelength-band. Graphene waveguide photodetectors may play an important role in mid-infrared silicon photonics, which will play an important role in time resolved spectroscopy, lab-on-chip sensing, nonlinear photonics, as well as optical communication” they said.