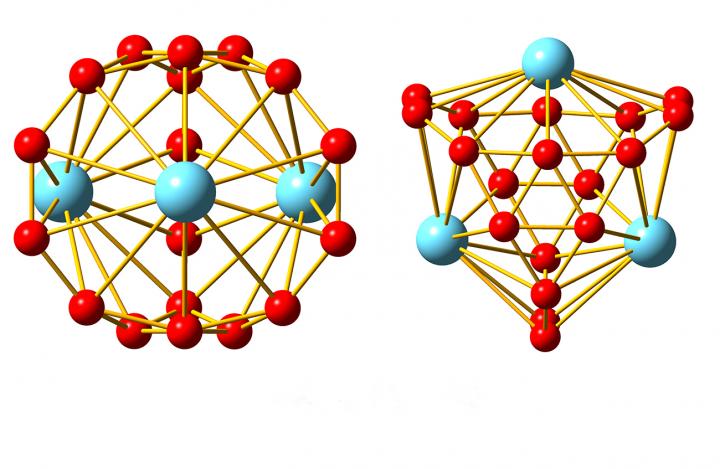 Now, researchers from Brown and Tsinghua University have added another boron nanostructure to the list. In a paper published in Nature Communications, they show that clusters of 18 boron atoms and three atoms of lanthanide elements form a bizarre cage-like structure unlike anything they've ever seen.

“This is just not a type of structure you expect to see in chemistry,” said Lai-Sheng Wang, a professor of chemistry at Brown and the study's senior author. “When we wrote the paper we really struggled to describe it. It's basically a spherical trihedron. Normally you can't have a closed three-dimensional structure with only three sides, but since it's spherical, it works.”

The researchers are hopeful that the nanostructure may shed light on the bulk structure and chemical bonding behavior of boron lanthanides, an important class of materials widely used in electronics and other applications. The nanostructure by itself may have interesting properties as well, the researchers say.

“Lanthanide elements are important magnetic materials, each with very different magnetic moments,” Wang said. “We think any of the lanthanides will make this structure, so they could have very interesting magnetic properties.”

Wang and his students created the lanthanide-boron clusters by focusing a powerful laser onto a solid target made of a mixture of boron and a lanthanide element. The clusters are formed upon cooling of the vaporized atoms.

Then they used a technique called photoelectron spectroscopy to study the electronic properties of the clusters. The technique involves zapping clusters of atoms with another high-powered laser. Each zap knocks an electron out of the cluster.

By measuring the kinetic energies of those freed electrons, researchers can create a spectrum of binding energies for the electrons that bond the cluster together.

“When we see a simple, beautiful spectrum, we know there's a beautiful structure behind it,” Wang said.

To figure out what that structure looks like, Wang compared the photoelectron spectra with theoretical calculations done by Professor Jun Li and his students from Tsinghua. Once they find a theoretical structure with a binding spectrum that matches the experiment, they know they've found the right structure.

“This structure was something we never would have predicted,” Wang said. “That's the value of combining theoretical calculation with experimental data.”

Wang and his colleagues have dubbed the new structures metallo-borospherenes, and they're hopeful that further research will reveal their properties.