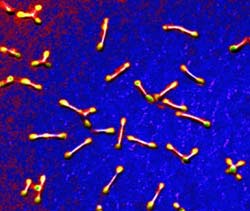 “Nanodumbells” – gold-tipped nanocrystals which can be used as highly-efficient building blocks for devices in the emerging nanotechnology revolution – have been developed by researchers at the Hebrew University of Jerusalem.

The technology, developed by a research group headed by Prof. Uri Banin of the Department of Physical Chemistry and the Center for Nanoscience and Nanotechnology of the Hebrew University, is described in an article in the current issue of Science magazine.

The nanodumbells – shaped somewhat like mini-weightlifting bars – offer a solution to problems of building new, nanocrystal transistors, the basic component of computer chips.

Semiconductor nanocrystals are tiny particles with dimensions of merely a few nanometers. A nanometer (nm) is one-billionth of a meter, or about a hundred-thousandth of the diameter of a human hair. These nanocrystals exhibit unique optical and electrical properties that are controlled by modifying their particle size, composition and shape, creating promising building blocks for future nanotechnology devices, such as mini-computers, nanosensors for chemical and biological molecules, novel solar-cell devices, or for various biomedical applications.

The challenge that lies ahead in adapting these nanocrystals to real-world application lies in wiring them to operate in electronic circuits. How, in the manufacturing process, will it be possible to join billions of them together and incorporate them into a single, integrated, electrical circuit? Another problem is that of establishing good electrical contact in order to ensure speedy and faultless channels of communication.

The new technology developed by Prof. Banin and his team provides the solution to these two limiting problems. They succeeded in attaching gold tips onto nanorods by a simple chemical reaction. The resultant structure resembles a nanodumbbell, in which the central, nanocrystal, semiconductor part of the rod is linked via a strong chemical bond to the gold tips. These nanodumbbells provide strong chemical bonds between the gold and the semiconductor, leading to good electrical connectivity. This provides the path towards solving the problem of wiring the nanocrystals intro electrical circuitry.

The chemical bonding quality of the gold also helps solve the difficulties involved in manufacturing simultaneously up to billions of circuits. By adding to the nanodumbbell solution specific “linker” molecules, the gold tips are attracted to each other, thus creating self-assembling chain structures of nanocrystals, linked end-to-end. This strategy can serve as the basis for future manufacturing that will connect billions of nanorods to nanoelectronic circuitry. It is also possible to create other shapes, such as tetrapods, in which four arms expand from a central unit, making gold-tipped “anchor” points for different forms of self-assembly and wiring. This development will speed up the integration of semiconductor nanorods and tetrapods into real-world nanoelectronic applications.