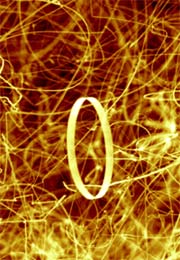 Single-crystal seamless nanoring made of piezoelectric zinc oxide. The ring diameter is about 3 microns and the thickness is about 15 nanometers. <br>Credit: Zhong L. Wang research group

An article to be published in the February 27 issue of the journal Science introduces “nanorings” as the newest member of a growing family of nanometer-scale structures based on single crystals of zinc oxide, a semiconducting and piezoelectric material that has important technological applications.

The rings, complete circles formed by a spontaneous self-coiling process, could serve as nanometer-scale sensors, resonators and transducers – and provide a unique test bed for studying piezoelectric effects and other phenomena at the small scale. The nanorings join “nanobelts” and “nanosprings” in a family of zinc oxide structures produced by researchers at the Georgia Institute of Technology using a high-temperature solid vapor process.

“Nanorings are made up of fine nanobelts that are rolled up as coils layer-by-layer with as many as a hundred loops,” said Zhong L. Wang, director of Georgia Tech’s Center for Nanoscience and Nanotechnology and a professor in the School of Materials Science and Engineering. “This is a new nanostructure with a novel growth mechanism. The seamless nanorings, each made of a uniformly deformed single crystal of zinc oxide, could be the basis for nanoscale devices and serve as a model system for studying electrical and mechanical coupling at the nanoscale.”

The research has been sponsored by the National Science Foundation and NASA. Georgia Tech has sought patent protection for the nanoring growth process, which was developed by Wang and collaborators Xiang Yang Kong, Yong Ding and Rusen Yang.

The rings, which range in diameter from one to four microns and are 10-30 nanometers thick, form in a horizontal tube furnace when a mixture of zinc oxide, indium oxide and lithium carbonate – at a ratio of 20:1:1 – is heated to 1,400 degrees Celsius under a flow of argon gas.

The structures form on an alumina substrate in a section of the furnace maintained at a temperature of between 200 and 400 degrees C. They begin growing as nanobelts, long ribbon-like structures that were first produced by Wang and his research team in 2001. The belts have a width and thickness of about 15 nanometers.

The surfaces of these nanobelts are dominated by polar charges – positive on one side, negative on the other – created by the terminations of zinc ions and oxygen ions on opposite sides of the structures. That creates a spontaneous polarization across the thickness of the nanobelts. If the nanobelts remain straight, the overall dipole moment diverges as they grow longer. However, coiling the nanobelts into a ring neutralizes the polar charges, resulting in a decrease in electrostatic energy. As the structures grow, therefore, long-range electrostatic forces cause them to begin folding and coiling upon themselves, likely as a way to minimize electrostatic energy in the system, Wang explains.

If the nanobelts fold onto themselves, the negatively- and positively-charged surfaces bind together through charge attraction, and the structure continues growing parallel to the rim, loop-by-loop. The charge attraction brings the loops together in perfect alignment.

After about 30 minutes in the furnace, the high temperature causes the coils to become sintered together, with epitaxial and chemical bonding forming a single crystal that can no longer be separated into individual loops. The resulting nanorings vary in width, composed of as few as five and as many as 100 loops.

Wang says the lithium and indium materials facilitate the unique growth mechanism by creating a planar defect in the zinc oxide nanobelt. That defect creates energetic conditions and leads to rapid growth of the nanobelt along the rim.

“Nanorings offer a combination of many unique and attractive properties in one system,” said Wang. “We want to build some unique devices that will test different electromechanical properties, particularly electro-mechanical coupling and applications in bio-detection. We want to fully use the piezoelectric properties, in addition to the semiconductor properties, because they will allow us to explore properties no other systems have.”

Nanorings and nanosprings are candidates for building implantable sensors for real-time monitoring of such biomedical measures as blood pressure, blood flow rate and stress at the level of single cells, Wang said.

“This is a rich family of materials that allows us to make a broad range of structures with interesting mechanical and electrical properties,” he explained. “They could be very important because other nanostructures do not have piezoelectric properties. The discovery of these zinc oxide structures could open a few field of research in nanoscale piezoelectric structures and devices. For biomedical applications, zinc oxide would also have the advantage of being biocompatible.”

In March 2001, Wang’s research team announced in Science that they had created a new type of nanometer-scale structure that could be the basis for inexpensive ultra-small sensors, flat-panel display components and other electronic nanodevices. Dubbed nanobelts, the structures could be fabricated from semiconducting metal oxides such as zinc oxide, producing ribbon-like structures five to 100 nanometers wide and up to a millimeter or more in length.

The structures offer advantages for making nanoscale devices because of their well-defined growth direction and regular and well-defined side surfaces. Their conductivity, bandgap, surface properties and optical properties can be controlled by introducing oxygen vacancies in the wurtzite crystalline structure.