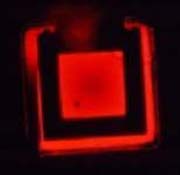 Engineers at Ohio State University have overcome a major barrier in the manufacture of high quality light emitting devices and solar cell materials.

Steven Ringel, professor of electrical engineering, and his colleagues have created special hybrid materials that are virtually defect-free — an important first step for making ultra-efficient electronics in the future.

Ringel directs Ohio State’s Electronic Materials and Devices Laboratory, where he and his staff grow thin films of “III-V” semiconductors — materials made from elements such as gallium and arsenic, which reside in groups III and V of the chemical periodic table.

Because III-V materials absorb and emit light much more efficiently than silicon, these materials could bridge the gap between traditional silicon computer chips and light-related technologies, such as lasers, displays, and fiber optics.

Researchers have tried for years to combine III-V materials with silicon, but only with limited success. Now that Ringel has succeeded in producing the combination with record quality, he has set his sights on a larger goal.

“Ultimately, we’d like to develop materials that will let us integrate many different technologies on a single platform,” Ringel said.

Key to Ringel’s strategy is the idea of a “virtual substrate” — a generic chip-like surface that would be compatible with many different kinds of technologies, and could easily be tailored to suit different applications.

Ringel’s current materials design consists of a substrate of silicon topped with III-V materials such as gallium and arsenide, with hybrid silicon-germanium layers sandwiched in-between. The substrate is 0.7 millimeters thick, while the gallium arsenide layer is only 3 micrometers — millionths of a meter — thick.

Other labs have experimented with III-V materials grown on silicon, but none have been able to reduce defect levels below a critical level that would enable devices like light emitting diodes and solar cells to be achieved, Ringel said.

Defects occur when the thin layers of atoms in a film aren’t lined up properly. Small mismatches between layers rob the material of its ability to transmit electrical charge efficiently.

Ringel and his colleagues grew films of III-V semiconductors with a technique known as molecular beam epitaxy, in which evaporated molecules of a substance settle in thin layers on the surface of the silicon-germanium alloy. They then used techniques such as transmission electron microscopy to search for defects.

Defects are missing or misplaced atoms that trap electrons within the material, Ringel explained. That’s why engineers typically measure the quality of a solar cell material in terms of carrier lifetime — the length of time an electron can travel freely through a material without falling into a defect.

The engineers have crafted the III-V material into one-square-inch versions of solar cells in the laboratory, and achieved 17 percent efficiency at converting light to electricity. They have also built bright light-emitting diodes (LEDs) on silicon substrates that have a display quality comparable to that of traditional LEDs.

The next phase in this research will carry Ringel’s materials into space, as part of NASA’s Materials International Space Station Experiment (MISSE). An international partner spacecraft will deliver samples of the materials to the space station so they can be tested and possibly developed for use in future spacecraft.

This work was funded by the Army Research Office and the National Science Foundation.