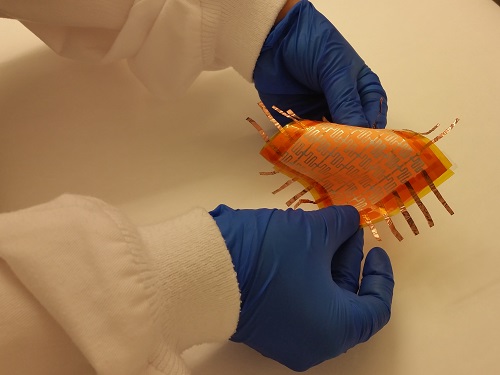 The flexible temperature array was made by drawing a resistor structure with a silver conductive ink pen on Post-it paper. © 2016 KAUST

Everyday materials found in the kitchen, such as aluminum foil, sticky note paper, sponges and tape, have been used by a team of electrical engineers from King Abdullah University of Science and Technology (KAUST) to develop a low-cost sensor that can detect external stimuli, including touch, pressure, temperature, acidity and humidity. Their work was published on February 19, 2016 in the inaugural issue of Advanced Materials Technologies by Wiley-VCH (Germany).

The sensor, which is called Paper Skin, performs as well as other artificial skin applications currently being developed while integrating multiple functions using cost-effective materials.

Wearable and flexible electronics show promise for a variety of applications, such as wireless monitoring of patient health and touch-free computer interfaces, but current research in this direction employs expensive and sophisticated materials and processes.

“Our work has the potential to revolutionize the electronics industry and opens the door to commercializing affordable high-performance sensing devices,” stated Muhammad Mustafa Hussain, KAUST associate professor of electrical engineering from the University’s Integrated Nanotechnology Lab, where the research was conducted.

The materials were put together into a simple paper-based platform that was then connected to a device that detected changes in electrical conductivity according to external stimuli.

Increasing levels of humidity, for example, increased the platform’s ability to store an electrical charge, or its capacitance. Exposing the sensor to an acidic solution increased its resistance, while exposing it to an alkaline solution decreased it. Voltage changes were detected with temperature changes. Bringing a finger closer to the platform disturbed its electromagnetic field, decreasing its capacitance.

The team leveraged the various properties of the materials they used, including their porosity, adsorption, elasticity and dimensions to develop the low-cost sensory platform. They also demonstrated that a single integrated platform could simultaneously detect multiple stimuli in real time.

Several challenges must be overcome before a fully autonomous, flexible and multifunctional sensory platform becomes commercially achievable, explained Hussain. Wireless interaction with the paper skin needs to be developed. Reliability tests also need to be conducted to assess how long the sensor can last and how good its performance is under severe bending conditions.

“The next stage will be to optimize the sensor’s integration on this platform for applications in medical monitoring systems. The flexible and conformal sensory platform will enable simultaneous real-time monitoring of body vital signs, such as heart rate, blood pressure, breathing patterns and movement,” Hussain said.

“We may also transfer the achieved functionalities of the technology to biologically grown skin and develop mechanisms to connect it to neuronal networks in the human body to assist burn victims, for example. Other applications include robotics, vehicular technology and environmental surveys,” he added.

KAUST-NSF Research Conference on Electronic Materials, Devices and Systems for a Sustainable Future:

From March 14 to 16, 2016 Hussain and colleagues from KAUST and the United States National Science Foundation (NSF) will host the KAUST-NSF Research Conference on Electronic Materials, Devices and Systems for a Sustainable Future on the KAUST campus. Work in the electronics field, such as Hussain's low-cost paper sensor, will be highlighted during the three-day event.

The conference will also provide the opportunity for the KAUST scholarly community to exhibit research and innovations through a poster presentation session. Submission for posters will be available from February 21 to March 1.

The conference is made possible with financial support from the KAUST Office of Sponsored Research. It is co-sponsored by the National Science Foundation (NSF), United States of America, KAUST Industry Collaboration Program (KICP) and the Computer, Electrical and Mathematical Science and Engineering (CEMSE) Division.

A regular panelist of U.S. NSF grant reviewing committees, Hussain is also editor-in-chief of Applied Nanoscience (Springer), editor of IEEE Transactions on Electron Devices and an IEEE senior member. He has served as a first or corresponding author in 80% of his 232 research papers and has 41 issued or pending U.S. patents.

About King Abdullah University of Science and Technology:
King Abdullah University of Science and Technology (KAUST) is an international, graduate-level research university located along the Red Sea in Saudi Arabia. KAUST is dedicated to advancing science and technology through interdisciplinary research, education and innovation. Curiosity driven and goal-oriented research is conducted by students, faculty, scientists and engineers to address the world’s pressing scientific and technological challenges related to food, water, energy and the environment. www.kaust.edu.sa