Inselspital: Images from the depths of the brain 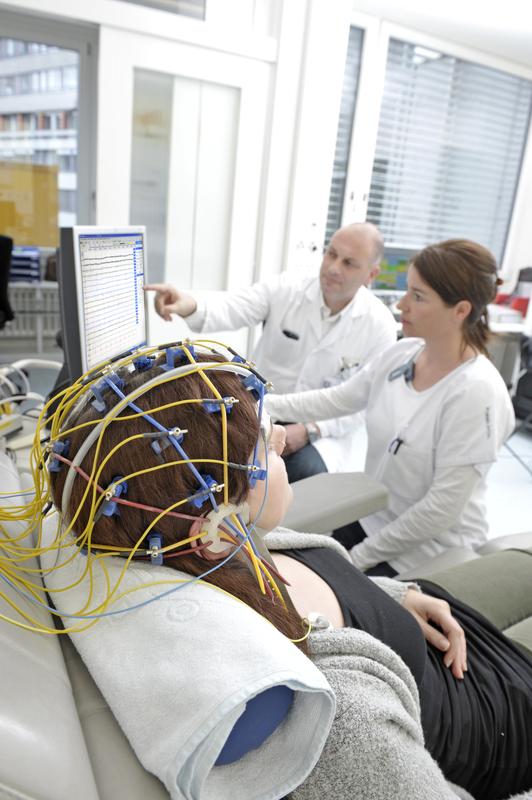 The new method can do what the surface EEG cannot: show electrical activities in the brain. Inselspital, Bern University Hospital

For over 20 years, doctors have been dreaming of depicting the brain’s electrical activity in an MRI scan. Researchers from Bern University Hospital have now succeeded in making this dream a reality by means of a unique method.

The research team of physicist Dr Claus Kiefer and doctors Eugenio Abela, Kaspar Schindler and Roland Wiest from the Support Center for Advanced Neuroimaging (SCAN) at the Department of Diagnostic and Interventional Neuroradiology and the Department of Neurology at Bern University Hospital used the new method in a pilot study with eight epilepsy patients.

In doing so, it was found that the newly developed MR sequence makes magnetic field disturbances visible, even in deep regions of the brain. The surface EEG, which is otherwise used, has never achieved this. As a result, it is possible to localise the origin of the epileptic seizures with even more precision, which benefits those patients who exhibit no structural abnormalities in the “normal” MRI.

In addition, researchers demonstrated that epilepsy patients, who are seizure-free after an operation, no longer show such magnetic field disturbances – that their brain works “disruption-free” like that of a healthy person. On the other hand, patients who continued to have seizures still demonstrated the typical pathological signals. These astounding new insights into the function of our brain were published on 29th January in the renowned American journal, Radiology.

Patented methods only in Bern

The revolutionary imaging method is patented by the University of Bern and is only currently offered at Bern University Hospital. The advantage: If epilepsy patients, whose medication is not helping, need an MRI examination, just eight additional minutes in the MRI can better localise the region of origin of the exaggerated electrical brain activity. This is also the case if patients are not currently having a seizure, as the method is so sensitive that it even records weak epileptic activity that exists between the actual seizures.

The newly developed MR sequence is now expected to be validated internationally in further clinical studies.