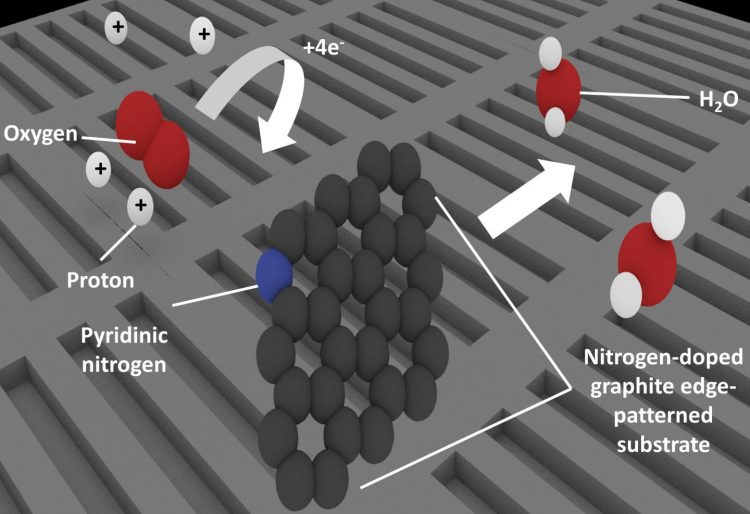 Patterning nitrogen-doped graphite to create many edges also increases the amount of pyridinic nitrogen present. Carbon atoms adjacent to pyridinic nitrogen behave as the active site for oxygen reduction, which is a key process in fuel cell technologies. Credit: University of Tsukuba

The oxygen reduction reaction is a key step in the operation of fuel cells, but depends on expensive precious metal-based catalysts. Carbon-based catalysts with added nitrogen are among the most promising alternatives to precious metals, and could allow more widespread use of fuel cell technology. However, until now, the arrangement of nitrogen and carbon that gave the catalytic effect remained a mystery, stalling efforts to develop more effective materials.

In an article published this week in Science, a team of researchers from the University of Tsukuba identified the catalytic structure and proposed a mechanism by which the reaction works. “We knew that nitrogen-doped carbon was a good oxygen reduction catalyst, but no one was sure whether the nitrogen was pyridinic or graphitic,” said corresponding author Prof. Junji Nakamura.

To solve the mystery, the team fabricated four model catalyst substrates, which simulated competing potential structures and analyzed their reaction performance. Pyridinic nitrogen, or nitrogen atoms bonded to two carbon atoms, occur mainly at the edges of the material. By patterning the substrates to change the number of edges, the team could control the presence of pyridinic nitrogen and measure how it affected the catalytic performance. These results showed that the active catalytic sites were associated with pyridinic nitrogen.

Taking the research a step further, the investigators then proposed the various stages of the reaction mechanism after finding that it was actually the carbon atom next to the nitrogen that was the active site rather than the nitrogen atom itself. As the corresponding author Prof. Nakamura noted: “Clarifying the active site and mechanism is a great step forward and will allow optimization studies to focus on driving up catalyst performance.”