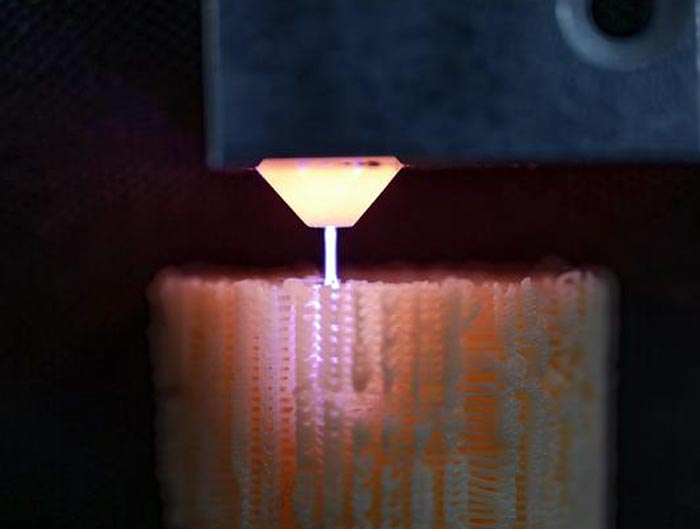 Stability is one of the core requirements and at the same time an important potential weak point for components manufactured in layer-by-layer 3D printing such as Fused Deposition Modelling (FDM).

One key to greater stability is to improve the adhesion between the individual layers, and the researchers at the Fraunhofer Institute for Surface Engineering and Thin Films IST achieve this through targeted chemical modification of the surface by using atmospheric pressure plasmas.

Various plasma sources have been developed at the Fraunhofer IST specifically for this application, which can be integrated into the 3D printer and thus enables the individual layers, which are often no longer accessible later, to be treated during the printing process.

External surface modifications of 3D-printed components often simplify or enable further processing steps such as metallising the plastic surfaces or applying lacquers and adhesives. However, the inner surfaces of the components are often no longer accessible for such post-treatment. With the use of layer-by-layer plasma treatment already during the manufacturing process, adhesive forces between the individual layers of the component are increased on the one hand and, on the other hand, a modification of the surface in cavities that could not be pre-treated previously is made possible at the same time. The result is more stable, higher-quality and longer-lasting components.

Up to now, plasma sources have only been used serially, i.e. separately from the printing process. To enable integration of the source into the 3D printer, the source and control unit must be adapted to various requirements: The plasma source must be small and light enough and also meet specifications with regard to heat generation or safety, for example. The control unit must ensure optimal and safe operation of both the source and the 3D printer.

The prototype of the Fraunhofer IST currently contains a miniaturised point source with which the printed surfaces and filaments can be modified at high resolution. In the long term it is planned to use a ring source which is mounted around the nozzle of the 3D printer and thus allows direct treatment during the printing process and without additional time expenditure.

The possible applications are manifold – from small batch production with an integrated surface modification as a prerequisite for further processing such as metallisation, bonding or painting, to the production of more resilient parts from low-cost FDM 3D printers, to the use of the plasma sources in experimental settings. The researchers are certain that there are still many creative applications for the technology.

At K2022 from 19 to 26 October 2022, the Fraunhofer IST will present a prototype of the plasma point source, mounted on a commercial 3D printer for demonstration purposes, at a joint stand of the Fraunhofer-Gesellschaft (Hall 7, Stand SC01). Possible applications will be demonstrated using components that have already been printed and plasma treated.