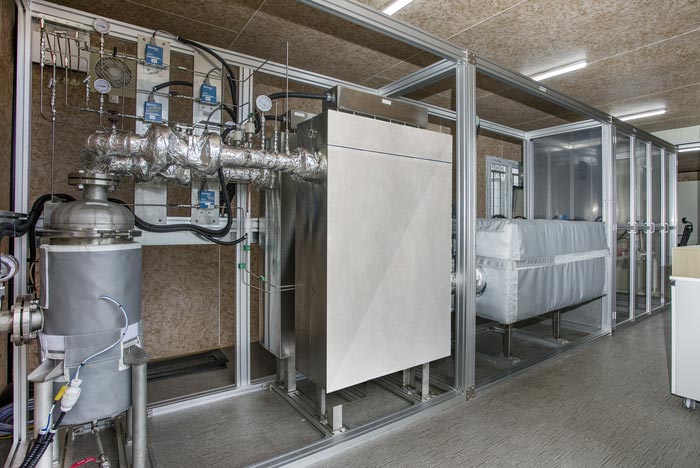 Recently, there has been growing demand for DeNOx catalysts that can treat nitrogen oxides (NOx) at low temperatures, to increase energy efficiency when processing flue gas in industrial combustion facilities. NOx are emitted during the combustion of fossil fuels and are the leading cause of ultrafine particles (UFPs) formed via chemical reactions in the atmosphere.

However, existing catalysts have a problem of reduced durability due to the poisoning of the catalyst’s active sites because of the formation of ammonium sulfate, when sulfur in flue gas reacts with reducing agent ammonia at a low temperature (<250°C). To address this, studies have attempted to weaken the oxidation ability of sulfur oxide on the catalyst surface or delay the poisoning by limiting the reactivity of sulfur compounds; however, these solutions cannot increase the durability against sulfur.

At the Extreme Materials Research Center, part of the Korea Institute of Science and Technology(KIST), a research team of Dr. Kwon, Dong Wook and Dr. Ha, Heon Phil announced the development of a high-durability low-temperature catalyst material for selective catalytic reduction (SCR); it can reduce NOx into water and nitrogen, which are harmless to the environment and the human body.

The team successfully developed a composite vanadium oxide-based catalyst material that significantly limited the formation of poisonous ammonium sulfate by suppressing the adsorption reaction between the active sites and sulfur dioxide. A catalyst interface engineering technique was used in which molybdenum and antimony oxide were added to the vanadium-based catalyst.

The developed vanadium oxide-based composite catalyst material has significantly increased catalytic life when exposed to sulfur dioxide at 220°C, with the time to reach 85% of the initial performance delayed by about seven times compared to that in the conventional catalyst. The developed catalyst is also energetically efficient due to increased low-temperature activity, which significantly lowers the burden of NOx treatment without reheating the exhaust gas. As a result, it is possible to reduce air pollutant treatment costs if the developed catalyst is applied to industrial sites in the future.

After completing the laboratory-scale reactor experiment, the team installed a pilot demonstration facility at the Kumho Petrochemical’s Yeosu 2nd Energy Cogeneration Power Plant to test using actual flue gas. The KIST-Kumho Petrochemical team aims to establish plant facilities by 2022 after deriving an optimal operation plan by evaluating and verifying the driving variables of the demonstration facility for about ten months.

Ko, Young Hoon, the head of R&BD center of Kumho Petrochemical (Vice-President), mentioned, “Reducing NOx, which accounts for most of the harmful substances in the exhaust gas of our Cogeneration Power Plant, is a critical issue for Kumho Petrochemical’s ESG management.” Then, he added, “We are successfully conducting empirical research by installing pilot equipment for power plants to secure preemptive reduction technology above the level of advanced countries, and we plan to conduct scale-up test of the technology in order to transform it to a high-durability low-temperature SCR catalytic commercial technology.”

The Korea Institute of Science and Technology(KIST), founded as the first multidisciplinary government-funded research institute in Korea, established a national development strategy based on science and technology and disseminated various essential industrial technologies. Now, half a century later, KIST is elevating Korea’s status in the field of science and technology through world-leading fundamental technology R&D. Looking to the future, KIST will continue to strive to be a premier research institute, pursuing a brighter future of human.

This research was supported by the Korean Ministry of Science and ICT as a KIST Institutional R&D Projects and Northeast Asia-region-linked Ultrafine Particle Response Technology Development Project. The research is published in the ‘Chemical Engineering Journal’