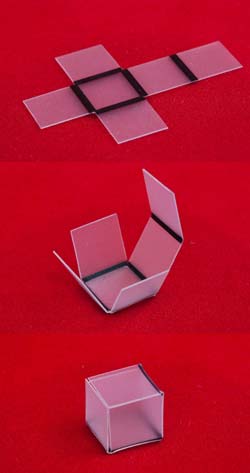 Soft Matter (Nov. 10, 2011)<br>Michael Dickey, North Carolina State University<br>The new technique can be used to create a variety of objects, such as cubes or pyramids, without ever having to physically touch the material.<br>

“This is a novel application of existing materials, and has potential for rapid, high-volume manufacturing processes or packaging applications,” says Dr. Michael Dickey, an assistant professor of chemical and biomolecular engineering at NC State and co-author of a paper describing the research.

The process is remarkably simple. Researchers take a pre-stressed plastic sheet and run it through a conventional inkjet printer to print bold black lines on the material. The material is then cut into a desired pattern and placed under an infrared light, such as a heat lamp. A video demonstration is available at http://www.youtube.com/watch?v=NKRWZG67dtQ

The bold black lines absorb more energy than the rest of the material, causing the plastic to contract – creating a hinge that folds the sheets into 3-D shapes. This technique can be used to create a variety of objects, such as cubes or pyramids, without ever having to physically touch the material. The technique is compatible with commercial printing techniques, such as screen printing, roll-to-roll printing, and inkjet printing, that are inexpensive and high-throughput but inherently 2-D.

“You can also pattern the lines on either side of the material,” Dickey says, “which causes the hinges to fold in different directions. This allows you to create more complex structures.”

“This finding stems from work we were doing on shape memory polymers, in part to satisfy our own curiosity. As it turns out, it works incredibly well,” Dickey says.