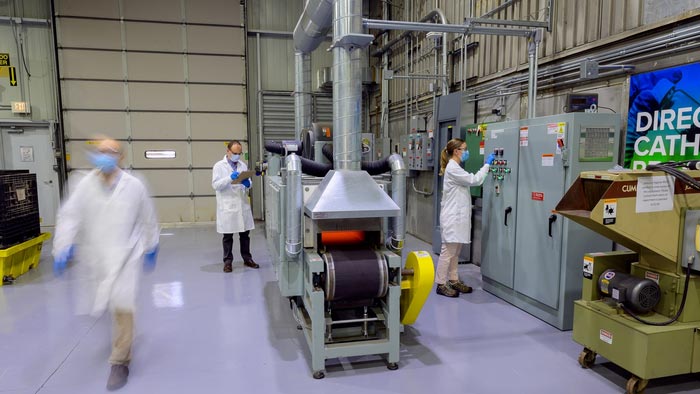 Recharging the batteries in electronic devices — as large as electric vehicles or as small as cell phones — has become as everyday an activity as loading the dishwasher. The lithium-ion batteries that primarily power these devices are lightweight and cost-effective to produce. However, they are by nature inflammable, which raises concerns about their safety and reliability as power and grid storage demands continue to grow.

Applied research at the U.S. Department of Energy’s (DOE) Argonne National Laboratory suggests that replacing lithium-ion batteries with better technology may be possible sooner than expected.

Chemists from across the laboratory have been making discoveries in the basic science behind solid-state batteries for years. Then scientists at Argonne’s Materials Engineering Research Facility (MERF) scale up those discoveries and bring them closer to the market.

The value of speed and uniformity to battery manufacturing is straightforward, and higher density improves how long a battery can be used. Improving the sintering process is key to unlocking all of these advantages.

Sintering may be the bridge to better batteries

Sintering involves heating a powder material until it slowly forms into a solid material without any holes or pores. This process is important in solid-state batteries because the thin material separating the cathode and anode must be strong enough and dense enough to withstand handling during manufacture, assembly and operation. It must also deliver high performance; that is, the battery must allow for fast charging, conduct electricity well and last a long time.

By improving the sintering process, Argonne’s scientists can also allow for the replacement of the graphite material commonly used today with lithium metal. This replacement doubles the energy density of the battery, which means that the same size battery can store twice as much energy.

Testing and improving the processes and technologies that create these solid battery materials at meaningful industrial scale and at lower cost is the MERF’s specialty. Currently, no one produces solid-state batteries that are cost competitive with traditional lithium-ion batteries.

“In order for new materials to be adopted by industry, the processes to make them must be cost competitive to what is currently being done, and the materials must possess significant advantages over material in the current market,” explained Durham. ​“At the MERF, we develop cost-effective processes for making new materials by replacing expensive components, lowering energy consumption, reducing waste and improving processing conditions without sacrificing the performance of the material. Doing this research at the MERF allows Argonne scientists to de-risk technologies and provide industry with a ready to go, scaled-up process.”

Argonne is one of the U.S. national laboratories working to scale solid-state electrolyte materials for batteries. It does so as part of its ongoing push to scale up complex materials and chemical processes critical to U.S. competitiveness in industrial manufacturing. The 28,000-square-foot MERF has been vital in helping Argonne to advance this effort, with a proven track record of using the latest technologies to help companies make new, emerging materials for advanced applications.

“Argonne is an important partner for industry because we can help them de-risk new technologies or materials,” said Durham. ​“De-risking these for industry will allow them to commercialize products faster, which will save them valuable time and money. This is how Argonne researchers put science to work.”

EERE’s mission is to accelerate the research, development, demonstration, and deployment of technologies and solutions to equitably transition America to net-zero greenhouse gas emissions economy-wide by no later than 2050, and ensure the clean energy economy benefits all Americans, creating good paying jobs for the American people—especially workers and communities impacted by the energy transition and those historically underserved by the energy system and overburdened by pollution.

The U.S. Department of Energy’s Office of Science is the single largest supporter of basic research in the physical sciences in the United States and is working to address some of the most pressing challenges of our time. For more information, visit https://​ener​gy​.gov/​s​c​ience.