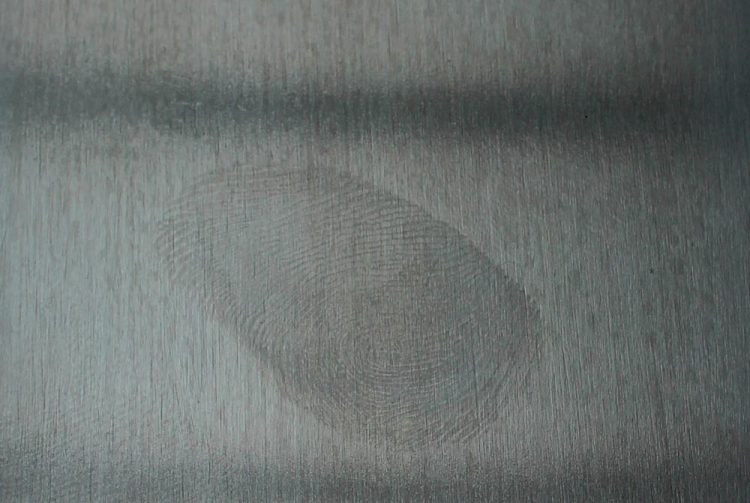 The shiny new refrigerator features an attractive stainless steel front. But it doesn’t take long before the door is covered in dark fingerprints that are difficult to remove with only a cloth and detergent; the job actually calls for some arduous polishing. Fingerprints like these are more than just unsightly, the grease film also attacks the metal surface.

Together with their colleagues at FEW Chemicals GmbH in Wolfen, researchers from the Fraunhofer Institute for Microstructure of Materials and Systems IMWS in Halle are now working to put an end to smears like these. The secret lies in a coating layer containing special additives and which is water and oil repellent. This layer's effects are twofold: When the particles integrated in the coating settle on the surface of the stainless steel, the surface becomes rougher and its surface area increases.

When a finger comes into contact with the refrigerator door, it only touches the raised points on the surface and the grease on the fingertip never reaches the “valleys” of the stainless steel surface. This means the surface area which actually comes into contact with the grease is kept very small. In addition the refractive index of the coating has been adjusted so that it matches that of the skin’s natural oil content. This means light is reflected by the coated stainless steel surface in about the same manner as by a surface that has been touched by sticky fingers. As a result, the fingerprints are hardly noticeable.

Analysis of the layer systems

While FEW Chemicals GmbH is handling the development of the coating systems, the Fraunhofer team is concentrating on the analysis of these layers. “We’re investigating the layers created using not only optical microscopy, but also scanning electron microscopy and atomic force microscopy. We look at how large the individual particles in the coating system are and whether or not they are distributed homogenously.

The effect of the additives used is another focus of our analysis,” says Dr. Jessica Klehm, research associate in the business unit “Biological and Macromolecular Materials” at Fraunhofer IMWS. Such questions are extremely important in the assessment of the quality of the coating. For example, if the nanoparticles aggregate to form larger particles, the coating may lose its transparency as a result. On the other hand if the particles are too small, the surface remains too smooth, so that the grease film can adhere to it over larger areas in spite of the coating.

Several challenges had to be overcome before these investigations could be conducted. First and foremost, the samples had to be recuced in size. Optimum investigations with optical microscopy as well as further investigation with other methods requires the samples to have a thickness of no more than 60 to 80 micrometers, i.e. about the thickness of a human hair; examination under a transmission electron microscope even requires a sample one thousand times thinner.

“We can’t cut the samples to size using a saw, which would destroy the coating. Therefore we embed the samples in resin and then grind them down to the desired thickness”, Dr. Klehm explains.

Furthermore the researchers are developing an automatic testing machine for the layers. The device is not intended to investigate the particles in the coating, but rather the visibility of the fingerprints themselves.

The machine dips a stamp in a solution whose composition resembles that of the oily film on human skin. Working automatically and with constantly identical force and duration, this stamp then presses on the coated surface in order to leave behind “fingerprints”.

The machine will use a combination of spectrometric and optical procedures to analyzes how much of the solution remains on the surface and thus to arrive at a percent value indicating the anti-fingerprint effect of the coating. The scientists are currently working to find the ideal combination of analytical equipment for the purpose.

And the researchers have already found a favorite among the various coating systems they have investigated. The task now is to further optimize the system. Development activities should be completed by the end of 2020, when the industrialscale production of the coating system will be turned over to FEW Chemicals GmbH.