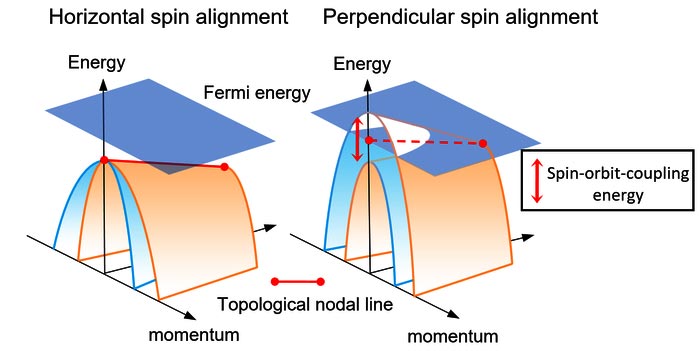 Schematic illustration of the metal-insulator transition in magnetic topological semiconductors. The topological nodal line is where electronic bands cross and form a line in energy-momentum space. With magnetic ordering, spin-orbit energy depending on the spin direction decides whether the system is a semiconductor (left) or metal (right).
Credit: Institute for Basic Science

Trillion percent change of resistance can be achieved in the new material by simply rotating the direction of spin.

While electrons are well known to carry both charge and spin, only the electric charge portion is utilized as an information carrier in modern electronic devices. However, the limits of modern electronics and the impending end of Moore’s Law have rekindled the interest in the development of “spintronic” devices, which are capable of harnessing the spin of the electrons. It is expected that the widespread adoption of spintronic computing devices can revolutionize information technology similar to the invention of electronics.

One key challenge in spintronics is finding an efficient and sensitive way to electrically detect the electronic spin state. For example, the discovery of giant magnetoresistance (GMR) in the late 1980s, allowed for such functionality. In GMR, a large change in electrical resistance occurs under the magnetic field depending on parallel or antiparallel spin configurations of the ferromagnetic bilayer. The discovery of GMR has led to the development of hard-disk drive technology, which is technically the first-ever mass-produced spintronic device. Since then, discoveries of other related phenomena, including colossal magnetoresistance (CMR) which occurs in the presence of a magnetic field, have advanced our understanding of the interplay between spin and charge degrees of freedom and served as a foundation of emergent spintronic applications.

In the latest issue of the journal Nature, a research team led by Prof. KIM Jun Sung in Center for Artificial Low Dimensional Electron Systems within the Institute for Basic Science (IBS, South Korea) and Physics Department at Pohang University of Science and Technology (POSTECH, South Korea) found a new magnetotransport phenomenon, in the magnetic semiconductor Mn3Si2Te6. The group found that the magnitude of change in resistance can reach as large as a billion-fold under a rotating magnetic field. This unprecedented shift of resistance depending on magnetic field angle is coined as colossal angular magnetoresistance (CAMR). “Unlike the previous magnetotransport phenomena, a huge change in resistance is induced by only rotating the spin direction without altering their configurations. This unusual effect originates from the unique topologically-protected band structure of this magnetic semiconductor,” notes Professor KIM Jun Sung, one of the co-corresponding authors of the study.

In 2018, the research team has reported the discovery of a ferromagnetic semimetal Fe3GeTe2 in Nature Materials. This material was found to have unique nodal-line-shaped band crossing points, and thus classified as a topological magnet. One unique property of this topological magnet is that degeneracy can be lifted in the nodal-line states depending on spin orientation. Extending the idea, the research team has focused on magnetic semiconductors, which possess topological nodal-line states in conduction or valence bands. Again, the band degeneracy of the nodal-line state is sensitive to spin orientation, but in magnetic semiconductors, the lifting of band degeneracy, controlled by spin rotation, can turn the system into either a semiconductor or a metal. Thus charge current flow can be switched on or off by spin rotation, as it is done in conventional semiconductors by applying an electric field.

Identifying the candidate material possessing both ferro- or ferrimagnetism and a topological band degeneracy was the first obstacle. Dr. KIM Kyoo at the Korea Atomic Energy Research Institute (KAERI), used first-principle calculation methods to predict a nodal-line-type band degeneracy in a ferrimagnet Mn3Si2Te6. When he rotated the net magnetic moment of Mn3Si2Te6 in his calculations, the nodal-line degeneracy was lifted, as found in Fe3GeTe2, which is strong enough to induce the bandgap closure. HA Hyunsoo and Prof. YANG Bohm-Jung at the IBS and Seoul National University used the symmetry analysis and found that nodal-line degeneracy of Mn3Si2Te6 is protected by a certain crystalline symmetry, reflecting its topological nature. The constructed Hamiltonian, taking into account both nodal-line states and strong spin-orbit coupling, can capture the calculated changes in the nodal-line states, depending on the spin direction.

Dr. SEO Junho and Dr. De Chandan in Prof. KIM Jun Sung’s research team at the IBS and POTSECH successfully synthesized single crystals of Mn3Si2Te6 and measured their resistance at low temperatures while rotating its spin moments using external magnetic fields. They found that large resistance, reaching gigaohm, turns to tens of milliohm as the magnetic field rotates. This huge change in resistance depending on magnetic field angle has never been observed and is, at least, 100 thousand times larger than previously known magnetic materials that show angular magnetoresistance. LEE Ji Eun and Prof. KIM Jae Hoon in the Department of Physics at Yonsei University in Seoul, South Korea used terahertz absorption measurements to experimentally confirm that the observed huge change in resistance is indeed due to electronic gap closure and the resulting insulator-to-metal transition, as it was theoretically predicted. These theoretical and experimental findings from the close collaboration of the research teams involved proved that the colossal angular magnetoresistance is a direct consequence of spin-polarized nodal-line states and their unique spin-charge coupling.

The newly discovered colossal angular magnetoresistance is expected to be utilized in vector magnetic sensing with high angular sensitivity or efficient electrical readout of the spin state. Furthermore, by exploiting the semiconducting nature of Mn3Si2Te6, a new type of spintronic device can be realized, in which both charge and spin degrees of freedom are modulated by using electric or magnetic fields simultaneously. One of the remaining challenges is how to extend the working temperature range of the colossal angular magnetoresistance up to room temperature. The colossal angular magnetoresistance is considered to be a common property of magnetic topological semiconductors that have a triangular lattice as a structural motif. “In nature, there is a vast possibility of candidate magnetic semiconductors, showing similar or even stronger properties at high temperatures, awaiting theoretical investigation and experimental verification,” noted Professor Yang, one of the co-corresponding authors of the study.