Home / Studies and Analyses / The formation of the North American Monsoon: a unique case in the world
26.11.2021 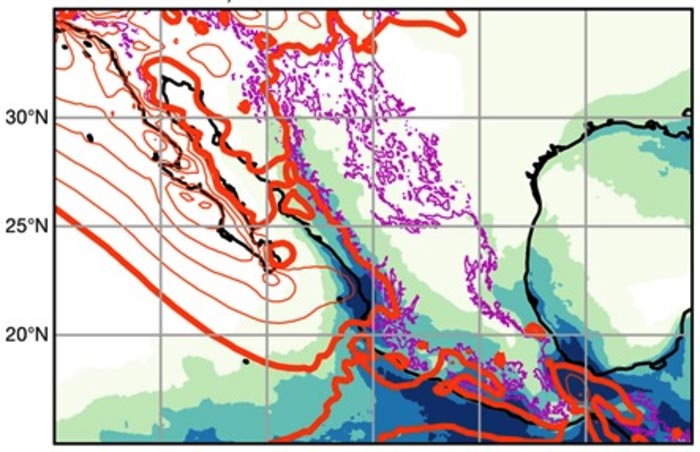 Deflection of the eastward jet stream (orange contours) from the midlatitudes toward the equator, where it produces precipitation (blue shading, units of mm/day) as it then ascends over the Sierra Madre mountain range (outlined by magenta contour).
Credit: Boos, W. R., and S. Pascale

Monsoons are not found only in South Asia, but they are part of a global-scale circulation that affects almost all tropical regions (e.g. Australian monsoon, African monsoon, etc.). One occurs in North America too, the North American monsoon, which affects western Mexico and the southwestern United States, in particular, Arizona and New Mexico.

To date, this monsoon was considered similar to other monsoons, although smaller. However, new research published in Nature by two scientists from the University of California, Berkeley (USA) and the University of Bologna now provides a new perspective on the processes that drive its formation.

“The results of our study show that the North American monsoon does not originate from the seasonal oscillation of the ITCZ (Intertropical Convergence Zone) over continental masses like a typical monsoon. Indeed, its origin represents a unique case as it is strongly influenced by Mexican orography which plays a key role in generating a stationary wave in the extratropical atmospheric circulation and deflecting the jet stream towards the Mexican west coast”, explains Salvatore Pascale, one of the two authors of the study, researcher for the Atmospheric Physics Group of the Department of Physics and Astronomy “Augusto Righi” at the University of Bologna and the Centre for Sustainability and Climate Change at the Bologna University Business School. “This new insight into the North American monsoon is relevant for understanding how climate change may affect this monsoon and how rising temperatures may change the extent of these weather phenomena”.

Monsoons indirectly influence global atmospheric circulation. They also play a key role in regulating climate in many tropical areas, which usually experience dry winters and wet summers. They are essential in bringing water to regions inhabited by billions of people. The North American monsoon is especially associated with heavy summer rainfall over an area spanning more than a thousand kilometres and it plays a crucial role in the hydrology of western Mexico and the southwestern US.

In the summer season, monsoons generally originate from the rapid warming of tropical landmasses and the resulting transfer of energy to the atmosphere above. In turn, this generates a circulation capable of producing heavy rainfall. Until now, the North American monsoon was thought to originate in the same manner. Thanks to a set of numerical simulations, scientists analysed the origin of this monsoon, showing that the mountain ranges in the region and their interaction with the extratropical circulation are responsible for its formation.

These results have implications for models and types of analyses used to dynamically forecast rainfalls brought by the North American monsoon in the region, especially considering the consequences that climate change could have in terms of droughts or extreme weather events.

The study was published in Nature under the title “Mechanical forcing of the North American monsoon by orography”. The authors are William R. Boos of the University of California, Berkeley (USA) and Salvatore Pascale of the Department of Physics and Astronomy “Augusto Righi” (Atmospheric Physics Group) at the University of Bologna and the Centre for Sustainability and Climate Change at the Bologna University Business School.