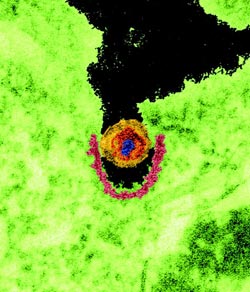 It must, however, be guaranteed that no pathogenic agents from animals are transmitted to the human body. Researchers at the Paul-Ehrlich-Institut have now been able to prove that although porcine endogenous retroviruses (PERV) can penetrate human blood cells under certain circumstances, they cannot replicate at these sites.

In connection with screening methods, the aim is to minimize the risk of transmission of PERV by the xenotransplant. The journal Xenotransplantation reports on the results of these research activities in its latest online edition.

Patients often have to face long waiting periods before they can receive an organ suitable for transplantation. This has not only been a problem since the transplantation scandal of last year. Pigs have been the subject of research as a possible organ donor for a long time. First clinical trials using insulin producing cells of the porcine pancreas in patients with type-1 diabetes are already underway in New Zealand and Argentina. Transplantations of whole animal organs such as porcine hearts or kidneys are also thinkable as a medium-term solution and are studied extensively. However, a transplantation of organs from other species to humans presents the risk that endogenous retroviruses, which form an integral part of the genome of the donor animals, will be transmitted in the form of replication-competent virus particles thus causing infections. Porcine endogenous retroviruses (PERV) present in pigs are closely related to retroviruses, which can cause leukaemia in mice, cats, or gibbons. It is therefore assumed that PERV can also cause such diseases after transmission to humans.

A research team of Professor Ralf R. Tönjes, head of the section “Non-vital Tissue Preparations, Xenogeneic Cell Therapeutics” of the Division “Medical Biotechnology” at the Paul-Ehrlich-Institut has investigated whether PERV can really infect human blood cells [1]. Although the investigators at the PEI performed their experiments in vitro, they created conditions as close as possible to the situation of a xenotransplantation to study the real risk of a PERV infection. The porcine cells were co-cultured with human lymphocytes over a period of one month – the human cells and the animal cells were separated from each other only by a membrane permeable for viruses. The researchers established that the PERV could pass the membrane and penetrate the human lymphocytes to a lesser extent. The viral DNA was then identified in these lymphocytes. However, this DNA was not functional, i.e. the genetic information could not be used by the cells to produce new intact virus particles. Productive infection involving the development of new infectious PERV was indeed not observed.

Besides, before xenotransplantations, safety experts have expressed that they require a two-step analysis of the transplant for transmissible PERV involving genetic screening and an assay with a highly sensitive human cell line. This test must be able to show that no functional PERV is present.

“Being a federal institute responsible for the authorisation of clinical trials on xenogeneic cell therapeutics, we require steps from the manufacturers and users which keep the risk of transmission of pathogenic agents during xenotransplantations to a minimum. Our experiments, which use the best screening methods currently available, indicate that no infectivity to human blood cells by PERV causing a disease would occur during xenotransplantations”, as Professor Tönjes explained when discussing the research results. Even if transmission of PERV occurred, human blood cells are equipped with cellular protective mechanisms against these viruses and would counteract them in the various phases of the replication cycle [2].

The Paul-Ehrlich-Institut, Federal Institute for Vaccines and Biomedicines, in Langen near Frankfurt/Main is a senior federal authority reporting to the Federal Ministry of Health (Bundesministerium für Gesundheit, BMG). It is responsible for the research, assessment, and marketing authorisation of biomedicines for human use and veterinary vaccines. Its remit also includes the authorisation of clinical trials and pharmacovigilance, i.e. recording and evaluation of potential adverse effects.

Other duties of the institute include official batch control, scientific advice and inspections. In-house experimental research in the field of biomedicines and life science form an indispensable basis for the varied and many tasks performed at the institute.