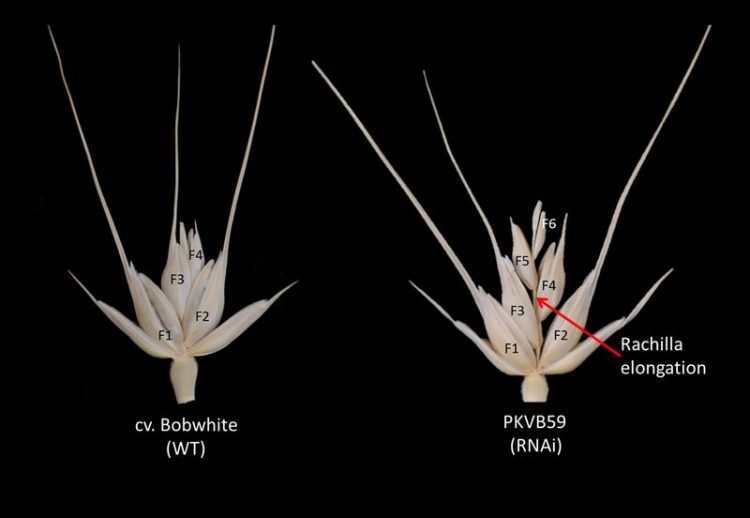 Even though the consequent gene GNI-A1 itself results in a lower grain yield, the researchers showed that its mutation, the reduced-function allele of GNI-A1, leads to an increased number of fertile florets and to a higher grain count. Due to this positive effect, the mutated allele has been under selection over the course of wheat domestication.

The large tribe of Triticeae encompasses several important cereal crops, including bread wheat (Triticum aestivum L.) and barley (Hordeum vulgare L.). One of the major outcomes of the domestication process of selected Triticae species has been the increased number of grains per inflorescence in modern cultivars – due to a boost in the crop’s floret fertility.

All Triticeae plants produce an unbranched inflorescence, referred to as a spike. In wheat, the spike is made up of several spikelets, which each generate an indeterminate number of grain-producing florets. At the floral developmental stage called “white anther”, each wheat spikelet normally produces up to 12 potentially fertile floret primordia.

However, more than 70% of the florets abort during their development. Whilst it is known that the number of grains set per spikelet is determined by the fertility of each floret, the genetic basis for floret fertility was recently still widely unidentified.

An international group of researchers, including several scientists from the Leibniz Institute of Plant Genetics and Crop Plant Research (IPK Gatersleben), have now collaborated in an effort to decode the genetic basis of floret fertility in wheat.

The researchers focussed on the quantitative trait loci (QTL) responsible for an enhanced grain number per spikelet, which was previously identified by a genome-wide association analysis of European winter bread wheat. They were able to map the QTL and identified the gene Grain Number Increase 1 (GNI-A1), which had evolved in the Triticeae through gene duplication, on chromosome arm 2AL.

The scientists showed that the resulting GNI-A1 encoded a homeodomain leucine zipper class I (HD-Zip I) transcription factor. The expression of the transcription factor resulted in the inhibition of the growth and development of the wheat rachilla, the axis bearing the florets within the spikelets, therefore negatively affected floret fertility and grain yield.

Over the course of domestication, a decrease of GNI1 expression had led to more fertile florets and an increase in grains per spikelet. However, through the additional analysis of high-yielding bread wheat cultivars, the researchers were able to reveal a reduced-function allele of the GNI-A1 gene. This mutated allele was found in modern wheat with higher floret fertility, implying that it increased floret fertility and that a selection for wheat cultivars carrying the reduced-function allele had taken place during further wheat-domestication.

The first author of the study, Dr. Shun Sakuma (Leibniz Institute of Plant Genetics and Crop Plant Research (IPK), Gatersleben, Germany and Tottori University, Japan), who had started this work under the supervision of Dr. Takao Komatsuda at the National Institute of Agrobiological Sciences (presently National Agriculture and Food Research Organization (NARO), Japan), emphasises that “this study shows for the first time a direct association between increased floret fertility, higher grain number per spike, and higher plot yields of field-grown wheat”.

The project had been continued when Dr. Sakuma had joined the research group of Dr. Thorsten Schnurbusch at the IPK Gatersleben. Further experiments were performed in collaboration with members of three additional IPK research groups as well as scientists from the Israeli Hebrew University of Jerusalem.

As a further result of the international collaboration, GNI-A1 proved to be an orthologue of the barley Vrs1 gene, which controls lateral floret fertility and leads to inhibited floret development. Similar to the reduced-function allele of GNI-A1, the loss-of-function mutants of Vrs1 led to an increased grain yield.

Having previously also contributed to elucidating the molecular basis of barley Vrs1, Dr. Komatsuda (NARO) now is “very pleased that we have discovered what GNI1 actually does in wheat”. The appearance of GNI1/Vrs1 and the parallel selection of the mutated alleles seem to be in line with the genetic hotspot hypothesis, which implies that evolutionary relevant mutations tend to accumulate in specific genes and at specific positions within genes.

The identification and understanding of the genetic basis of floret fertility now opens new options for further investigation of plant architecture and for grain yield improvement in wheat. And, as noted by Dr. Schnurbusch (IPK), “this knowledge may help in finding related genes working in the same direction to further improve cereal breeding to fulfil needed demands.”

– Floret fertility is a key determinant of the number of grains per inflorescence in cereals but little is known regarding the genetic basis of floret fertility in wheat (Triticum sp.).
– Identification of the locus Grain Number Increase 1 (GNI1), which evolved due to gene duplication, resulting in the gene GNI-A1.
– GNI-A1 encodes a homeodomain leucine zipper class I (HD-Zip I) transcription factor. The expression of the gene negatively affects floret fertility by inhibiting rachilla growth.
– A subsequently evolved reduced-function allele of GNI-A1 contrastingly increases floret fertility and leads to the increased number of fertile florets per spikelet. This mutation, favouring increased grain production, has been under selection during wheat domestication.
– Collaboration of researchers from Japan, Germany and Israel
– Publication in PNAS