Sleep twitches light up the brain 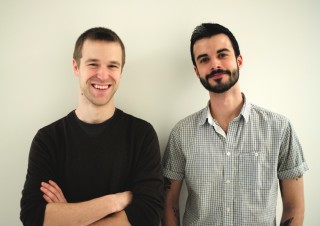 UI graduate students Alexandre Tiriac, left, and Carlos Del Rio-Bermudez say the findings of their new study provide further evidence that newborns learn about their bodies by twitching in their sleep.

A University of Iowa study has found twitches made during sleep activate the brains of mammals differently than movements made while awake.

Researchers say the findings show twitches during rapid eye movement (REM) sleep comprise a different class of movement and provide further evidence that sleep twitches activate circuits throughout the developing brain. In this way, twitches teach newborns about their limbs and what they can do with them.

“Every time we move while awake, there is a mechanism in our brain that allows us to understand that it is we who made the movement,” says Alexandre Tiriac, a fifth-year graduate student in psychology at the UI and first author of the study, which appeared this month in the journal Current Biology. “But twitches seem to be different in that the brain is unaware that they are self-generated. And this difference between sleep and wake movements may be critical for how twitches, which are most frequent in early infancy, contribute to brain development.”

Mark Blumberg, a psychology professor at the UI and senior author of the study, says this latest discovery is further evidence that sleep twitches— whether in dogs, cats or humans—are connected to brain development, not dreams.

“Because twitches are so different from wake movements,” he says, “these data put another nail in the coffin of the ‘chasing rabbits’ interpretation of twitches.”

What they discovered was puzzling, at first.

“We noticed there was a lot of brain activity during sleep movements but not when these animals were awake and moving,” Tiriac says.

The researchers theorized that sensations coming back from twitching limbs during REM sleep were being processed differently in the brain than awake movements because they lacked what is known as “corollary discharge.”

So, when the UI researchers noticed an increase in brain activity while the newborn rats were twitching during REM sleep but not when the animals were awake and moving, they conducted several follow-up experiments to determine whether sleep twitching is a unique self-generated movement that is processed as if it lacks corollary discharge.

The experiments were consistent in supporting the idea that sensations arising from twitches are not filtered: And without the filtering provided by corollary discharge, the sensations generated by twitching limbs are free to activate the brain and teach the newborn brain about the structure and function of the limbs.

“If twitches were like wake movements, the signals arising from twitching limbs would be filtered out,” Blumberg says. “That they are not filtered out suggests again that twitches are special—perhaps special because they are needed to activate developing brain circuits.”

The UI researchers were initially surprised to find the filtering system functioning so early in development.

“But what surprised us even more,” Blumberg says, “was that corollary discharge appears to be suspended during sleep in association with twitching, a possibility that – to our knowledge – has never before been entertained.”