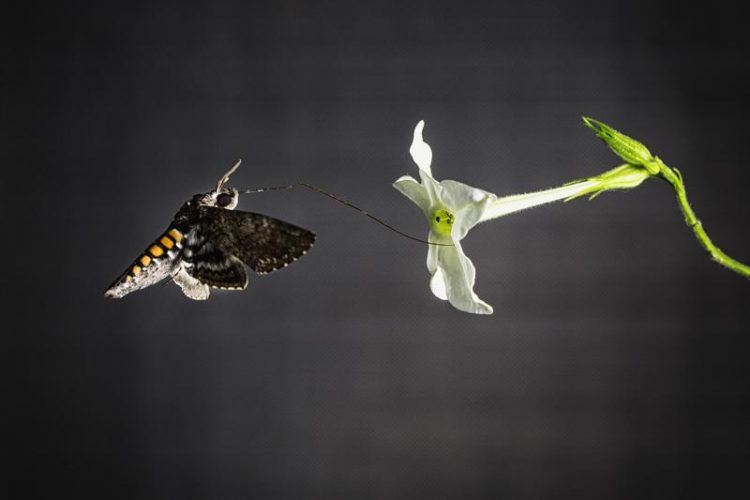 A hawk moth (Manduca sexta) uses its eight-centimeter-long proboscis to drink nectar from a flower of Nicotiana alata. Anna Schroll

That the morphology of many pollinators corresponds strikingly to the shape of the flowers they pollinate was observed more than 150 years ago by Charles Darwin. He described this perfect mutual adaptation of flowers and pollinators as the result of a co-evolutionary process.

Scientists at the Max Planck Institute for Chemical Ecology in Jena, Germany, have now provided further proof of the famous naturalist’s theory. They were able to show that Manduca sexta moths acquired the highest energy gain when they visited flowers that matched the length of their proboscis.

The moths were supported in their choice of the best-fitting nectar sources by an innate preference for the scent of matching flowers. The results of this study have been published in the journal Nature Communications (Nature Communications, May 2016, doi: 10.1038/NCOMMS11644).

Flower-pollinator systems as a result of mutual adaptation

Charles Darwin, the founder of the theory of evolution, was an astute observer of nature. His extraordinary understanding of natural history laid the foundation of his theory about the origin of species. In 1862, he published a book about orchids and their pollinators in which he described the orchid Angraecum sesquipedale, which was cultivated in England but originated from Madagascar.

Because of the flower’s morphology, Darwin hypothesized that there must be a pollinator in the plant’s native habitat with an extraordinarily long proboscis enabling the nectar in the flower to be reached. In 1903, more than 20 years after Darwin’s death, such a pollinator was in fact discovered: the hawk moth Xanthopan morganii, which received the subspecies name praedicta (the predicted) in honor of Darwin’s hypothesis. This moth has a proboscis which is more than 22 centimeters long.

Biologists use the term “pollination syndrome” when they explain the amazing diversity of flowering plants and pollinators which has emerged as a result of co-evolution. A flower-pollinator system can be highly specialized. Both partners benefit from the relationship: The plant increases the likelihood it will transfer pollen to flowers of conspecifics and not waste it on other species. Specialized pollinators, on the other hand, have an advantage over competing generalist pollinators, which are also foraging for nectar, because their proboscis is better adapted. The disadvantages of such specialization are that the reproductive success of the highly specialized plant wanes when its pollinator is absent, and the survival rate of the pollinator decreases in the absence of the plant as well.

Darwin’s observations inspired Markus Knaden, who heads the studies with Manduca sexta hawk moths in the Department of Evolutionary Neuroethology, and his colleagues. They hypothesized that there must be a flower which fits this pollinator perfectly, although the moth is a generalist and visits a broad range of flowering plants. The tobacco hawk moths are larger than usual moths; when they hover in front of a flower in order to drink nectar they must beat their wings more than 30 times a second, an activity which looks exhausting and requires a lot of energy. The high energy loss makes the right selection of flowers extremely important: the moths cannot afford to waste energy on flowers whose nectar they cannot reach.

Energy balance after visiting a flower

In order to test their hypothesis, the scientists first developed a small wind tunnel which they used to determine the energy loss of moths during the flight. The loss was determined by measuring the carbon dioxide the moths were breathing out. (The amount of carbon dioxide exhaled is directly related to the energy moths consume when foraging for nectar.) In addition, the researchers used gas-chromatographic and mass-spectrometric analyses to calculate the concentrations of single sugars in the nectar of the flower species used in the experiments and thus to determine each flower’s calorie content.

Altogether, seven tobacco species of the genus Nicotiana were tested. These Nicotiana flowers differed greatly in the lengths of their corollas; in centimeters, these ranged from less than 1.5 (Nicotiana rustica), to over 3 (Nicotiana attenuata), to 7.5 (Nicotiana alata) and to more than 11 (Nicotiana longiflora). “Although we had originally expected that the longer flowers which contain more nectar would also be more attractive in terms of energy gain, we found that essentially all flowers in our test provided the same amount of calories. While the longer flowers had more nectar, the nectar of shorter flowers was more concentrated. The nectar provided could not be the reason why visiting some flowers was more profitable than visiting others,” explains Alexander Haverkamp, a doctoral student who is the first author of the study.

From their measurements and calculations, the scientists were able to deduct the energy balance: the net-energy gain which resulted from balancing the energy gain per flower visit against the energy spent on hovering in front of a flower. Energy loss can be measured in the form of carbon dioxide, whereas energy gain is measured as the calories acquired from nectar uptake.

3-D tracking in the wind tunnel

Are moths able to assess the expected net-energy gain of a flower from a distance? To answer this question, the researchers designed a three-dimensional tracking system specially developed for the wind tunnels and consisting of multiple cameras which can record the movements of single moths. The flight of each moth was recorded in the dark for four minutes and then evaluated. For the first time, scientists were able to measure and visualize where in the wind tunnel odor molecules (here, the scents of the flowers) were present and at what concentrations. This new technology made it possible to correlate the presence of an odor with the behavior of a moth, especially when the moth first came into contact with this odor.

All moths in the experiments were encountering the scent of flowers for the first time; therefore, their responses to the odors and the preferences they revealed had to be innate. Hungry moths showed the strongest response to the flower of Nicotiana alata. The odor of this flower was especially attractive. Moths which encountered this odor plume immediately navigated towards it. Moreover, the moths were easily able to reach the nectar of these flowers with their probosces.

Therefore, only visits to N. alata flowers resulted in a positive net-energy gain. When visiting other Nicotiana flowers, hawk moths spent excessive amounts of energy, because they had difficulty drinking nectar from flower corollas which were too short or too long. “We showed that Darwin's prediction that each flower has a pollinator with a proboscis fitting into the flower, in Manduca not only resulted in a very long tongue, but also in a preference for the odor of the fitting flower. And that this co-evolution is beneficial for the moth, as the moth gets the best energy gain from fitting flowers,” Knaden concluded.

The pollination syndrome is important for the survival of many plants. In the course of evolution, mutual adaptations have resulted in the emergence of many species as well as in highly specialized flower-pollinator interactions. “Each pollinating species is important for the biological diversity on our planet. If one of the two partners becomes rare or extinct, this may have fatal consequences,” Haverkamp points out. Without pollinators, many flowers could no longer produce fruits. This would affect not only crop yield but the variety of food available for all humans. [AO]