Home / Life Sciences / Reproduction: How male flies enforce their interests to the detriment of females
11.04.2019

Reproduction: How male flies enforce their interests to the detriment of females 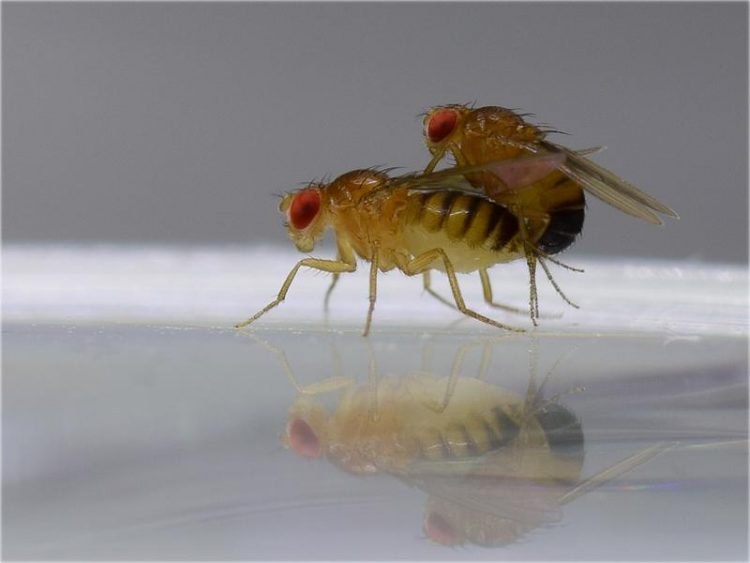 The fundamental biological process of reproduction can differ greatly from animal species to species. Both males and females sometimes evolve creative strategies in pursuing their interests in these mating interactions.

This has been studied for quite some time in small species such as the fruit fly Drosophila melanogaster, where the female receives proteins through the male’s seminal fluid – which, after the actual mating, leads to radical changes in her behaviour and in the processes occurring inside her body.

The proteins increase her activity, reduce her sexual receptivity and stimulate her immune system.

It has been known for some time that such processes are not always beneficial for both sexes. Researchers from Münster (Germany) and Lausanne (Switzerland) have now taken a closer look at which mechanisms change evolutionarily if there are no conflicts of interest between the sexes, i.e. competition between males is eliminated.

The result: male flies produce fewer proteins in their seminal fluid, which changes the behaviour of the females. This means that male flies mainly manipulate their partners in order to increase their own chances in reproductive competition – as a side effect, females often have health disadvantages.

“With the current study we confirm a theory that has existed for a long time,” says evolutionary biologist Claudia Fricke, a research group leader at the University of Münster. The study has been published in the journal PNAS (Proceedings of the National Academy of Sciences).

In order to determine the extent to which the different interests pursued by each sex play a role in the evolution of fruit flies, the researchers arranged for individual pairs of flies to live monogamously over many generations – contrary to their normal mode of reproduction. Only one male and one female mated with each other, ruling out any opportunity for antagonistic interactions among potential partners.

The male only gained as many offspring as the female could lay eggs. In a second group, five males and five females mated freely with one another. This polygamous lifestyle, a perfectly normal one for these insects, naturally created competition – both between males and between females, with the scope for antagonistic interactions. The total population was, however, of equal size in both groups.

After 150 generations and ten years of sexual selection, the researchers compared the behaviour and physiology of the flies in each group. They found that, in the first days after fertilisation, polygamous females laid one-third more eggs than those flies which had mated in an environment containing only one mating partner. Also, the females which had mated with a polygamous male were noticeably more restless – as shown in recordings of movement patterns. Both are factors that are influenced by receipt of these male seminal fluid proteins.

Why is that of advantage to the male? Since female flies are able to store the sperm of several partners and use it for more than a week to fertilise their eggs, the first male the female mates with does everything to ensure that she lays as many eggs as she can as quickly as possible and does not reproduce with others. This early investment is to the detriment of the female, which is discouraged from saving her energy and procreating over a longer time period.

This was also shown in the study: “Females, which had been with polygamous males died twice as frequently – within a few hours of mating – as females in monogamous relationships,” says Laurent Keller from the University of Lausanne, who was involved in the study with his colleague Brian Hollis.

In a further step, the scientists read out the expression of genes of female fruit flies after mating. In the female’s abdomen and brain – i.e. in the structures responsible for reproduction and for any changes in behaviour – the researchers measured the expression of genes important for reproduction. They discovered that these genes are far less expressed in females, which lived monogamously.

This corresponded to what they found in males. Without any competition, the monogamous males had a lower expression of genes coding for male seminal fluid proteins with which females can be manipulated after mating.

In subsequent studies, the researchers hope to identify further genes that play a role in this process in both female and male fruit flies. The general principles of their observation may also be transferable to other insect species with a similar mating system.