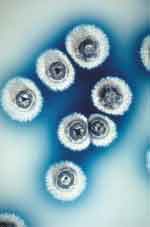 The genome sequence of Streptomyces coelicolor, one of the family of common soil bacteria that produce more than two thirds of the world’s antibiotic medicines, will be published in the journal Nature this week.

Streptomyces are almost ubiquitous in the soils and are responsible for its familiar ‘earthy’ smell. The genome data, collected by British scientists from the John Innes Centre and The Wellcome Trust Sanger Institute, is already being used in research that will help develop new types of antibiotics, anticancer agents and other beneficial chemicals.

New types of antibiotic are urgently needed to help counter the growing threat from so-called ‘superbugs’, such as MRSA (methicillin-resistant Staphylococcus aureus), that are resistant to conventional treatments. Last month, heart surgery at the Edinburgh Royal Infirmary was suspended after 13 patients in the cardiac unit were found to have MRSA. In 1992, 3 percent of blood poisoning cases were caused by MRSA. By 1999 that proportion had risen to 37 percent and by 2000 nearly 50 percent of cases were caused by the bug.

Streptomyces are harmless cousins of the bacteria that cause tuberculosis, leprosy and diphtheria. With the new sequence, many common features of all four genomes have been revealed and there is a real hope that studying these features in Streptomyces will provide new insights into these infamous diseases.

With 7,825 genes, Streptomyces is the largest bacterial genome to be sequenced. The project began in 1997, cost £2 million and was funded by the Biotechnology and Biological Sciences Research Council and The Wellcome Trust.