Dodo flew to its grave 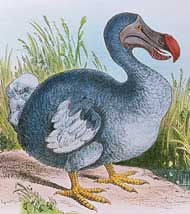 The dodo died out in the seventeenth century. <br>© SPL <br>

Ancestors of the flightless figurehead of extinction island-hopped.

The flightless dodo’s ungainly shape hid an island-hopping past, say researchers. DNA from the extinct bird has revealed its place in the pigeon family tree, and suggests how it came to end up on its home, and graveyard, the island of Mauritius1.

The dodo’s strange appearance led to centuries of wrangling over its ancestry. “It’s the figurehead of extinction, yet little is known about its evolution,” says zoologist Alan Cooper of the University of Oxford.

Cooper and his colleagues extracted DNA from museum specimens, including the one in Oxford that was the inspiration for the dodo in Alice’s Adventures in Wonderland.

Poignantly, the dodo’s closest relative is also extinct, the team found. The solitaire pigeon (Pezophaps solitaria), which was also large and flightless, lived on Rodrigues Island, 550 kilometres northeast of Mauritius. It died out in about 1765, a century after the dodo (Raphus cucullatus).

These birds are descended from Asian pigeons. The common ancestor of both species began its passage across the Indian Ocean about 43 million years ago.

The proto-dodo probably used the Mascarene islands as stepping-stones, the researchers suggest. This chain of volcanic islands also began to appear about 43 million years ago, stretching south from the Asian mainland. Many of the Mascarenes have now sunk back beneath the waves.

Mauritius and Rodrigues are youthful outposts of the group: Mauritius is about 7 million years old, Rodrigues a mere 1.5 million. Cooper speculates that the solitaire and dodo reached their new homes by air, later evolving flightlessness independently. “Rodrigues is far off over some deep ocean,” he says. “It’d be a lot easier to fly there.”