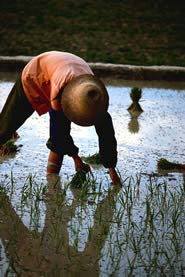 Government funding puts Chinese plant biotechnology second only to US

While westerners vacillate about the risks and benefits of genetically modified (GM) crops, China is embracing the technology. A new survey shows that the Chinese are working on more plant biotechnology products than anyone outside North America1.

Chinese research institutes claim to have developed 141 GM plants, 65 of which have been approved for release into the environment. Scott Rozelle, an agricultural economist at the University of California, Davis carried out the survey.

China’s GM success challenges the concern that developing countries, which stand to benefit most from such crops, cannot afford technologies produced in the West.

“We keep getting fed this line that developing countries won’t receive the benefits of biotechnology, instead they’re deciding for themselves,” says plant geneticist Nigel Halford of the Institute of Arable Crops Research in Long Ashton, England.

For a developing country China invests heavily in GM technology: spending $112 million in 1999 compared to about $15 million in India and Brazil, the other developing world leaders. By contrast the U.S. spends around $2 to $3 billion.

China’s GM research programmes are entirely government funded. The foods being modified reflect the concern that current food production will not fill the hungry mouths of its future population.

In the West, the GM crops that have gained farmers’ acceptance are those that simply improve profits. Instead, Chinese researchers seem to be focusing on creating better food crops such as disease- or drought-resistant rice, wheat and potatoes. Says Rozelle: “Researchers are not overwhelmingly motivated to capture financial return on the technologies.”

If China’s GM crops do fill the food gap, their other GM innovations could end up being exported, suspects Rozelle. China may well become the world leader in exporting GM-crop technology to other developing countries. “There have already been sales between China and south and southeast Asian countries,” he says.

Whatever the potential benefits of genetic modification, environmental and food safety concerns loom large. China has strict regulations regarding the testing of GM crops before release into the environment, but “less has been done on consumer safety”, admits Rozelle. “My gut feeling is that most Chinese look to the US for guidance in this area,” he says.

Freer regulations in China may be borne out in the figures. China’s plant biotechnology industry is in its infancy compared to America’s yet already has 65 plants licensed for environmental release. Fewer than 50 have been approved in the U.S.

And the developing world’s investment in agricultural biotechnology could be drawing important resources away from research into other farming practices that may be better in the long term, argue GM sceptics.

“Biotechnology may well become another short-term solution to long-term problems,” says Jane Rissler of the Union of Concerned Scientists in Washington DC.

There are other low-cost solutions to problems that GM technologies seek to overcome, Rissler points out. For example, planting different varieties of rice together to combat disease would also benefit from more research in China2.