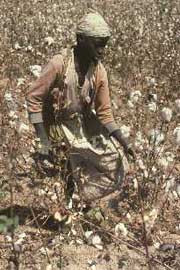 The discovery by French scientists that cotton plants produce a kind of ‘plant aspirin’ in response to bacterial infection could lead to new ways of fighting crop diseases.

Researchers led by the French Institute of Research for Development (IRD) found that salicylic acid — which has a chemical structure very similar to that of aspirin — and jasmonate acid are both released by cotton plants in response to infection by the bacterium Xanthomonas.

The two plant hormones play a central role in kick-starting the plant’s defensive reactions against the bacterium, which causes bacterial blight — a disease that can reduce cotton yields.

The role of jasmonate acid has long been recognised in seed germination and plant aging. But it also appears to be released in response to injury, the new research showing that it is produced between 90 and 120 minutes after the cotton is infected.

The two hormones interact in a complex manner in defending the plant against diseases, in a way that varies between plant species the type of infection. In addition ethylene, which affects flowering and fruit production, works together with jasmonate acid which, in turn, can block the mechanisms activated by salicylic acid.

The researchers, whose results will be published in a forthcoming issue of the journal The Plant Journal, hope to find ways of stimulating the production of these hormones in plants, thus improving their resistance to parasites and reducing the need for pesticides.