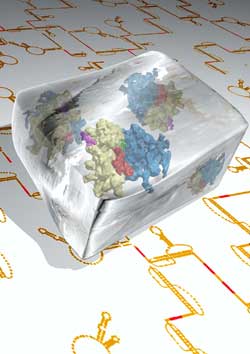 Caught in the act: induction of frameshifting by a viral pseudoknot - Mammalian ribosomes caught in the process of frameshifting. The ice block symbolizes the cryo-electron microscopy used to image the ribosomes, the background is a compilation of different viral RNA pseudoknots (artwork by Oliver Long and Stephen Moran) This image is protected under UK copyright law and may be used only where the correct attribution is provided: image courtesy Long and Moran.

For the first time, researchers at the Universities of Cambridge and Oxford have witnessed virus-induced “frameshifting” in action and have been able to identify the crucial role of particular elements.

The research, funded by the Biotechnology and Biological Sciences Research Council (BBSRC), the Medical Research Council (MRC), The Royal Society and The Wellcome Trust, brings us another step closer to understanding the fundamental workings of these devastating viruses.

The scientists have revealed the workings of the process known as ‘ribosomal frameshifting’ that forces a mis-reading of the genetic code during protein synthesis. The correct expression of most genes depends upon accurate translation of the ‘frame’ of the genetic code, which has a three nucleotide periodicity. Viruses such as HIV and SARS bring into the cell a special signal that forces the ribosome to back up by one nucleotide, pushing it into another ‘frame’ and allowing synthesis of different viral proteins. These are exploited by viruses and help them to survive and multiply.

The British researchers successfully imaged frameshifting in action and for the first time observed how a virus encoded element called an RNA pseudoknot interferes with the translation of the genetic code to allow viruses like HIV and SARS to express their own enzymes of replication.

Dr Ian Brierley, the project leader at the University of Cambridge, said: “This collaborative project was set up with Dr Robert Gilbert’s team in Oxford to investigate the structure of a frameshifting ribosome using electron microscopy. The images we obtained give us an insight into how a virus-encoded RNA pseudoknot can induce frameshifting and may be useful in designing new ways to combat virus pathogens that use this process.”

Professor Julia Goodfellow, Chief Executive of the Biotechnology and Biological Sciences Research Council, which was one of the main funders, said: “This is exciting and valuable research and demonstrates clearly why investment in fundamental science is so important. The treatments and therapies that we now take for granted are based on decades of work by scientists furthering our understanding of natural processes. The work to explore fundamental biology today is laying the foundation for potential medical applications over the next twenty years.”