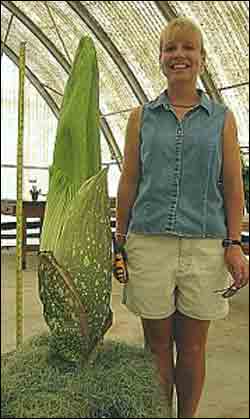 Virginia Tech has a second Amorphophallus titanum, or “corpse plant,” ready to bloom and emit its intensely powerful stench. People are invited to tie bandanas over their noses and come see the rare and unusual plant.


The horticulture greenhouse containing the plant is open to visitors Monday through Friday, July 26-30, and August 2-6, from 8 a.m. to 4 p.m. The likely date for the plant to bloom is Wednesday, Aug. 4, said Scott Rapier, greenhouse manager in the Department of Horticulture in Virginia Tech’s College of Agriculture and Life Sciences; follow the plant’s progress on the web at http://www.hort.vt.edu/VTHG/ if you want to see it on the date it blooms.

Although a blooming Amorphophallus titanum, or titan arum, is rarely seen, Virginia Tech’s first bloomed in August 2002, drawing crowds who braved the odor and the football traffic to see it. The smelly plant is rare because it puts forth one blossom every four to 10 years. This year, the second plant, located in Virginia Tech’s greenhouse complex, should bloom ahead of football traffic, making it easier for the public to visit the greenhouse. The first of these plants in the United States bloomed in 1937 at the New York Botanical Garden, and since, only about 20 have bloomed in this country.

In 1999, when the plant bloomed in the Huntington Botanical Garden in California, more than 76,000 visitors held their noses and went to see it. In Fairchild Garden in Florida, 5,500 visitors made the trek to see the infamous blossom; and at the Botanic Garden of the University of Bonn, Germany, the line to see the flowering titan arum extended more than two miles.

The plant invests a lot of energy during blooming to heat up the sulfur-based compound in the flower stalk so the carrion-like odor will spread several feet away from the plant to attract pollinators. The plant blooms seldom because of the amount of energy needed to bloom. To add to the plant’s humiliation, its pollinators include carrion beetles and flesh flies.

In spite of the plant’s long preparation for its flowery display, the blooms last, at best, two to three days, so visitors will have to be vigilant to see and smell it. A flowering stalk can be seven to 12 feet in height and three to four feet in diameter. After the bloom dies, a leaf stalk resembling a tree sapling will begin to emerge.

The plant was first discovered in 1878 in Indonesia, first cultivated at the Royal Botanic Gardens in England in 1887. The titan arum is in the same plant family as familiar house plants such as Dieffenbachia, Philodendrons, and Anthuriums.

Wheat Diversity Due to Cross-Hybridization with Wild Grasses