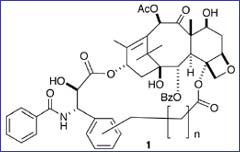 Having determined how paclitaxel fits into a cancer cell’s reproductive machinery, the team is optimistic that simpler molecules can be designed as future medicines.

Kingston will present the research that brought the team to this point at the 227th Annual Meeting of the American Chemical Society, being held in Anaheim, Calif., March 28 through April 1, 2004.

Paclitaxel, a natural compound from yew trees, is a relatively scarce resource, but synthetic forms and analogs have, so far, been less effective. So scientists have continued to study how the paclitaxel molecule works in order to develop more effective products.

Kingston explains that paclitaxel binds to tubulin, a protein molecule that forms the backbone of microtubules. Microtubules are a cell component whose duties include allowing chromosomes to move into the correct position for the cell to divide into two daughter cells.

“When paclitaxel binds to tubulin, it stabilizes the microtubules and messes up the equilibrium between tubulin and microtubule,” says Kingston. “A cell with stable microtubules proceeds to programmed cell death without dividing,”

How does paclitaxel bind to tubulin? There is a binding pocket in the protein into which part of the paclitaxel molecule fits. This binding pocket has been visualized by some elegant electron crystallography experiments carried out by scientists at the Lawrence Berkeley National Laboratory (Nogales et al., Cell, 1999, 96, 79). Paclitaxel consists of a rigid ring system attached to a flexible side chain, but the exact arrangement of the side chain in space is not known. Kingston explains, “The issue has been, what is the shape or orientation of the side chain when paclitaxel is sitting on the microtubule? If we could figure that out, we could design a molecule that would plug in better than paclitaxel for better binding and possibly better activity against cancer. What is the right conformation of the side chain?”

One hypothesis was put forward by Jim Snyder of Emory University. Based on a computer model of the paclitaxel binding site, he proposed a particular orientation of the side chain. Kingston, his colleagues, and Snyder then designed molecules with bridges between the ring and the side chain. “We thought that if we linked the bridge in the right position, maybe it would hold the side chain in the right place,” Kingston says.

It wasn’t a new idea. Gunda Georg of the University of Kansas and Iwao Ojima of the State University of New York (SUNY) Stony Brook both made bridged paclitaxel derivatives, but these were all less effective than natural paclitaxel.

Kingston collaborated with Snyder and Susan Bane of SUNY Binghamton to design a paclitaxel analog that linked in a new way. “We synthesized a number of the compounds and refined the details of how the link is formed until, last summer, we were able to get activity as good as paclitaxel.”

The research is significant because it has validated Snyder’s model, provided a more exact picture of the shape that paclitaxel takes in order to bind to tubulin, and “it offers the exciting possibility that now that we know that shape, we can design simpler molecules with a similar shape, which is what we are doing now,” Kingston says.

He will present the paper, ” Taxol Pharmacophore: Experimental evidence from a highly constrained analog and REDOR NMR (MEDI 192)” at 11.30 a.m., Tuesday, March 30, in Ballroom D at the Anaheim Convention Center. Co-authors of the paper are Kingston, Research Scientist Thota Ganesh, Graduate Student Rebecca C. Guza, and laboratory technicianJennifer K. Schilling, all at Virginia Tech; Susan Bane, Natasha Shanker, and Rudravajhala Ravindra of SUNY Binghamton, James P. Snyder and Ami Lakdawala of Emory, and Lynette Cegelski, Robert D. O’Connor, and Jacob Schaefer of Washington University, Saint Louis, all with the chemistry departments of their respective institutions. The material also will be presented as a poster during the SciMix from 8 to 10 p.m., Monday, March 29.