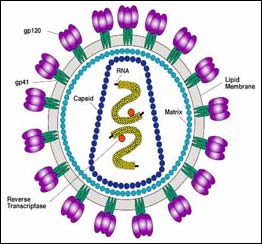 Scientists at the Dana-Farber Cancer Institute have identified a protein that blocks HIV replication in monkey cells. Humans have a similar protein, although it is not as effective at stopping HIV, say the researchers whose work is published in this week’s issue of Nature. The team, headed by Joseph Sodroski, M.D., is supported by the NIH’s National Institute of Allergy and Infectious Diseases (NIAID).

“Identification of this HIV-blocking factor opens new avenues for intervening in the early stage of HIV infection, before the virus can gain a toehold,” says NIAID Director Anthony S. Fauci, M.D. “The discovery also gives us critical insights about viral uncoating, a little understood step in the viral lifecycle. Basic discoveries like this provide the scientific springboard to future improvements in therapies for HIV disease.”

“Over the years,” notes Dr. Sodroski, “we’ve learned quite a bit about how HIV enters cells. More recently, we’ve developed a picture of the late stages of the viral lifecycle, as it leaves the cell. However, the steps between virus entry and conversion of the viral RNA into DNA have been a black box.” A key preparatory step is the removal, or uncoating, of the protective shell surrounding HIV’s genetic material. This coat, called the capsid, must be removed before HIV can insert its genetic material into the host cell’s DNA and begin to make copies of itself. (See http://www.niaid.nih.gov/newsroom/graphics/hiv1.jpg for a simplified diagram of HIV, including the capsid.)

The discovery of this host protein helps pry open the black box of uncoating. Called TRIM5-alpha, it is the first found to specifically target HIV’s capsid. With the identification of a specific protein that powerfully inhibits viral uncoating, says Dr. Sodroski, comes the possibility of manipulating and enhancing its activity. For example, he notes, humans have a version of TRIM5-alpha. While it is not as efficient as the simian version, it does have some HIV-blocking ability. “Perhaps this protein could be induced to greater activity, thereby increasing the level of resistance to HIV infection,” says Dr. Sodroski.

The discovery could also shorten the path to an AIDS vaccine by making improved animal models of HIV disease possible. Because monkeys are not susceptible to the human version of AIDS, results of vaccine trials conducted on them are not directly applicable to humans. Now with a better understanding of why HIV cannot successfully infect monkey cells, scientists have a defined target to manipulate and could use that information to develop animal models that more closely mimic HIV disease.

Matthew Stremlau, Ph.D., a member of Dr. Sodroski’s team and lead author on the new paper, searched the rhesus monkey genome and isolated a stretch of DNA that encodes the TRIM5-alpha protein. In a series of experiments using lab-grown cells that either possessed or lacked TRIM5-alpha, the scientists determined that TRIM5-alpha is both necessary and sufficient to block HIV replication. Although the precise mechanism of TRIM5-alpha’s activity is not fully determined, says Dr. Sodroski, it may be that the protein chops up HIV’s capsid and thwarts the orderly uncoating the virus must undergo before proceeding to replicate.

“This is a very exciting finding,” says NIAID’s Nabila Wassef, Ph.D., a program officer in NIAID’s Division of AIDS. “TRIM5-alpha strikes at the heart of HIV, preventing it from becoming an established infection. As we know, HIV disease can be treated, but not cured. In part this is due to the ability of HIV to take up permanent residence in the body. If we could find a way to disable the virus before it has a chance to replicate, this problem of latent infection would be eliminated.”

NIAID is a component of the National Institutes of Health (NIH), an agency of the U.S. Department of Health and Human Services. NIAID supports basic and applied research to prevent, diagnose and treat infectious diseases such as HIV/AIDS and other sexually transmitted infections, influenza, tuberculosis, malaria and illness from potential agents of bioterrorism. NIAID also supports research on transplantation and immune-related illnesses, including autoimmune disorders, asthma and allergies.

Press releases, fact sheets and other NIAID-related materials are available on the NIAID Web site at http://www.niaid.nih.gov.