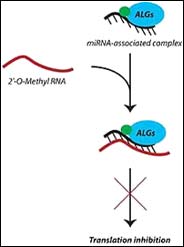 Regulation of gene expression–deciding how much of what proteins are produced in the cell–is controlled by a myriad of different molecules. One type of naturally occurring regulatory molecule is small interfering RNA (siRNA), which selectively disrupts the production of a protein it is programmed to recognize, a process called RNA interference. These short stretches of nucleotides combine with other cellular proteins to form an RNA-induced silencing complex, called RISC, which locates and destroys a targeted messenger RNA–the molecule that carries a protein recipe from the nucleus to the site of production in the cytoplasm. Biologists have discovered hundreds of other naturally occurring short pieces of regulatory RNA, called microRNAs, in both plants and animals. Like siRNA, they also affect gene expression, through similar, possibly even identical RISC molecules. Animal microRNAs, however, target messenger RNA at a different stage in protein production. Though researchers have determined the sequences of these microRNAs, uncovering their function–that is, which protein they interrupt and, in turn, what the interrupted protein does–has progressed slowly and sporadically without any decisive tool to study them. Only four animal microRNAs have known biological functions, despite the intense level of work going on in this field.

In order to determine the functions of siRNAs and microRNAs, Gyorgy Hutvagner and colleagues have developed a system whereby short stretches of 2’-O-methyl oligonucleotides whose sequence mirrors the targeted siRNA or microRNA, bind and inhibit their function, allowing researchers an unprecedented glimpse at the regulatory roles and mechanisms behind RNA interference. Hutvagner and colleagues constructed an oligonucleotide inhibitor based on the sequence of a microRNA called let-7, which blocks the production of the protein Lin-41 and is important for proper developmental timing in roundworm larvae. Larvae injected with the oligonucleotide had the exact features of a let-7 deficient worm, showing that the inhibitor did indeed block this microRNA’s function. Furthermore, the authors also used the oligonucleotides to provide evidence that two proteins, previously suggested to be involved with let-7, were directly associated with its interfering activity.

Using the technique described here, scientists could make rapid headway toward uncovering the biological functions of hundreds of microRNAs, their accessory RISC proteins, and even the proteins and genes they are programmed to interrupt. Furthermore, finding that RISC production is saturable could have significant implications for genetic studies that use RNA interference to uncover the function of sequenced, but unknown, genes; knowing the minimum required concentration of siRNA, researchers can avoid a buildup and any unwanted cell activity that goes along with it.

This article is presented as a pre-issue publication. It will be part of our April 2004 issue