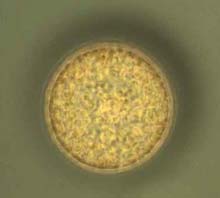 Biologists from the Royal Netherlands Institute for Sea Research have demonstrated that desert dust promotes the growth of algae. Scientists had already assumed that the iron in desert dust stimulated algal growth, but this has now been demonstrated for the first time. The researchers have published their findings in the December issue of the Journal of Phycology.

The researchers will use the laboratory results to predict how algae in the ocean respond to desert dust. The data obtained from these predictions will contribute to knowledge about the further development of the greenhouse effect, because algae absorb the greenhouse gas carbon dioxide and in so doing slow down the warming up of the Earth.

The complete study will be published in the Journal of Phycology, December 2003, Volume 39 (6), under the title: The role of the reactivity and the content of iron of aerosol dust on growth rates of two Antarctic diatom species. F. Visser, L.J.A. Gerringa, S.J. Van der Gaast, H.J.W. de Baar, K.R. Timmermans.
Image available at www.nwo.nl/news.

The research was funded by the Netherlands Organisation for Scientific Research, the EU and the Royal Netherlands Institute for Sea Research.