Key Step for Designer Plants that could clean up Heavy Metals 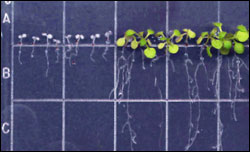 Images of plants without (left) and with (right) the gene to produce phytochelatins in roots exposed to cadmium. <br>Photo Credit Ji-Ming Gong, UCSD.

Researchers at the University of California, San Diego have demonstrated that a chemical that permits plants to detoxify heavy metals can be transported from the roots to stems and leaves, a finding that brings the possibility of using plants to clean up soil contaminated with toxic metals such as lead, arsenic and cadmium one step closer to reality.

A paper detailing the discovery appears this week in an advance online publication of the Proceedings of the National Academy of Sciences and will appear in the journal’s August 19th issue.

Bioremediation, the process of using organisms to restore toxic or damaged areas, could substantially reduce the costs of cleaning up the nation’s Superfund sites, estimated to require more than $700-billion. Of the top six pollutants at U.S. Superfund sites, four are heavy metals-lead, arsenic, mercury and cadmium-that may be able to be extracted with the help of plants.

“There are about four important steps in developing plants for bioremediation,” says Julian Schroeder, a professor of biology at UCSD who headed the study. “The roots of the plant need to secrete a substance that makes the metals in the soil soluble, making it possible for the plant to take them up. The plant needs to detoxify the metals once it takes them up, and the metals need to be transported to the stems and leaves of the plant, and stored there. We have found that phytochelatins, chemicals produced by an enzyme for which our lab co-discovered the gene four years ago, unexpectedly function in the root to leaf transfer of metals.”

Prior to his team’s recent discovery, plant biologists presumed that phytochelatins only acted within individual plant cells, surrounding and binding to, or “chelating” heavy metal ions, forming a complex, which is then sequestered in vacuoles—large storage compartments within plant cells. Phytochelatins, in other words, were not known to travel significant distances within a plant.

If the phytochelatins remain in the roots and concentrate the heavy metals there, using plants for bioremediation is much less feasible. That’s because pulling the plants out of the ground with the roots attached is much more difficult than harvesting the parts above ground, and because the leaves and stems produce a lot of new biomass for metal accumulation.

For bioremediation to be practical, heavy metals would need to be transported from roots to shoots. Initially, the UCSD biologists thought it unlikely that phytochelatins could perform this function. “We thought maybe the phytochelatins would be trapped in roots,” says Ji-Ming Gong, a postdoctoral fellow in Schroeder’s lab and the first author on the paper.

To their surprise, the phytochelatins, while only synthesized in the roots, were found in the leaves and stems as well. In addition, when the researchers exposed the roots of the genetically modified plants to cadmium, arsenate and mercury, the plants had restored resistance to these heavy metals. Furthermore, expression of the gene only in roots increased the accumulation of cadmium in leaves. This suggests that engineering plants with the gene to synthesize phytochelatins in roots could make plants contribute to bioremediation.

Cleaning up a site contaminated with heavy metals usually requires extensive bulldozing to remove the affected soil. This is very costly, damaging to the environment and requires a disposal site for the contaminated soil. Plants that can take up and store heavy metals could be a practical and relatively cost effective way of cleaning up contaminated sites. Plants could be grown, harvested and then incinerated to concentrate the heavy metals. Depending on the level of contamination, it might take multiple seasons of growing, harvesting and incinerating the plants to get the concentration of heavy metals in the soil to a safe range.

At present, the researchers concede that they do not understand the mechanism by which phytochelatins are transported from the roots to the shoots. But by better understanding how this occurs, it might be possible to optimize accumulation of heavy metals.

However, as a cautionary note, Schroeder points out, “Over-expressing this gene probably wouldn’t be enough to make plants useful for bioremediation. You would likely need to manipulate other genes in the heavy metal detoxification gene pathway.”

David Lee, a postdoctoral fellow in Schroeder’s lab also contributed to the discovery, which was supported by the National Institute on Environmental Health Sciences Superfund and National Science Foundation.