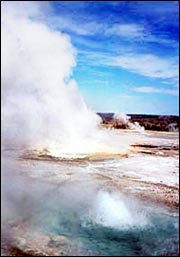 A study of microbes that thrive in hot, acidic conditions has overturned a long-held view that species of micro-organisms do not differ by geographic location like other forms of life. The research by the University of Cincinnati and the University of California-Berkeley has just been published online by the journal Science.

When it comes to plant life and animal life, a species usually shows genetic differences in different parts of the world. For the tiny form of life known as micro-organisms, the opposite has been considered to be true – they don’t tend to differ by geographic location. That long-held view has been convincingly overturned in a study by University of Cincinnati and University of California, Berkeley, researchers focusing on a form of life that flourishes in extremely hot conditions.

Co-authors Dennis Grogan of the University of Cincinnati and Rachael J. Whitaker and John W. Taylor of Berkeley provide the most comprehensive proof to date that at least one species of micro-organism in different parts of the world does have genetic differences, if you look close enough. Whitaker, the principal author, focused on the archaeon Sulfolobus, found in acidic hot springs and flourishing at temperatures from 140-180 degrees Fahrenheit. She drew the vast majority of samples for her analysis from archives developed and stored at the University of Cincinnati Department of Biological Sciences under the leadership of Grogan. Whitaker analyzed the DNA of some 78 cultures from the United States, Eastern Russia and Iceland.

Of those samples, more than 54 came from the University of Cincinnati collection that Grogan has built with the help of National Science Foundation funding as well as the help of undergraduate and graduate students. Micro-organisms From Extreme Environments, a summer course taught by Grogan, involves UC students in laboratory work that “isolates” the archaea samples from hot springs samples and preserves the live cultures in vials stored in freezers. Culturing archaea can be difficult because of the extreme conditions they enjoy.

It was not until the 1970s that Archaea were discovered and classified as one of three domains of life. The other two are bacteria and eukaryota (plants, animals, fungi and protists).

Many archaea survive in “extreme” environments that are “normal” for them, but for other life forms would be lethal or at least injurious. Sulfolobus, for example, flourishes in acidic hot springs – including those found bubbling at Yellowstone. Also known as “extremophiles,” these microscopic critters not only thrive in temperatures ranging from 65 to 85 degrees Celsius, but also love acidic conditions with a pH ranging from 2 to 4. The human body, on the other hand, is typically at 98.5 degrees Fahrenheit (37 degrees Celsius) and has a pH of 7.

Because archaea were not even discovered until about 25 years ago, says Grogan, they remain a relatively unknown domain of life. Recently, researchers have hinted that perhaps species of micro-organisms can differ by geographic location, but this study provides the most comprehensive evidence to date of that idea, he adds. The implications for understanding microbial life are far reaching.

“It is important to realize that disease-causing bacteria represent only a tiny fraction of a bewildering diversity of micro-organisms that we can grow in the laboratory. These cultured species, in turn, represent a tiny fraction of the species present in nature that are shaping our environment in ways we don’t fully understand. Now microbiologists have yet another level of complexity to consider, namely that differences within a microbial species can arise in different locations,” Grogan says. “This process may be increasing the diversity of microbial life in many environments.”

Because the hot springs where archaea live can be so dangerous, visitors to places such as Yellowstone are warned to stay on designated walkways. Researchers, including Grogan, must collect samples in areas where tourists won’t see them, using special tools for safety. Grogan typically goes into the field to collect samples in June.