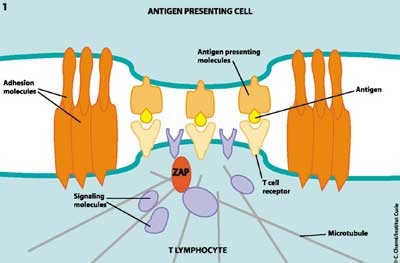 Img.1: Schematic model of the immune synapse: <br>* an inner "ring of receptors and signaling molecules. <br>* an outer "ring" with adhesion molecules.

Communication within the immune system

A familial form of severe combined immune deficiency (SCID) is caused by anomalies of an enzyme called ZAP-70. If ZAP-70 is lacking or does not work, the T-cells, which play a key role in the mechanisms of immune defense, are no longer functional. Affected children therefore catch infections as soon as they are exposed to pathogenic microorganisms. The only treatment at present is bone marrow transplantation.

INSERM research scientists at the Institut Curie have recently described the essential role of ZAP-70 in the communication between immune cells, in the October 2002 issue of Immunity.

Considerable progress has been made in recent years in clarifying the subtleties of communication between cells of the immune system. Numerous signaling molecules have been identified and subtle mechanisms unraveled. A succession of studies since 1998 has shown that the interaction between cells of the immune system is highly organized through narrow junctions called synapses, like their counterparts between neurons. These fundamental advances in the study of cell communication are crucially important for better understanding and improved treatment of immune system dysfunction.

Various characteristics observed in young patients suffering from this form of severe immune deficiency prompted Claire Hivroz and her group to study the role of ZAP-70 and its involvement in the mechanisms of signal transmission between cells of the immune system.

These young patients, for instance, have normal counts of CD4+ T-cells — immune cells that activate killer T-cells and antibody-producing B-cells – yet do not secrete antibodies in response to an infection.

In fact, CD4+ T-cells do not respond to stimulation by antigen-presenting cells (APCs) (see Img. 1). Normally, the interaction at the synapse between a T-cell and an APC leads to the activation of a series of enzymes, including ZAP-70, and culminates in the secretion of molecules that induce B-cells to synthesize antibodies.

Scientists at the Institut Curie are investigating the highly disruptive consequences of the absence of ZAP-70 at the synapse. When ZAP-70 is normal, molecular “rings” are formed at the intercellular contact or immune synapse between two cells. One of these rings comprises receptors, co-receptors and signaling molecules, which ensure the connection between the signal received from outside the cell and the triggering of a program of switching on genes in the T-cell nucleus.

Another ring (outside the first) is composed principally of adhesion proteins and maintains the physical contact between the two cells (see Img 1).

At the same time, within the T-cell, the cytoskeleton orchestrates the movement of surface proteins at this cell junction.

The microtubules move and form “tracks” which guide intracellular vesicles containing signaling molecules to the synapse.

All these events, which lead to the formation of a functional synapse, unfold according to a precise scenario in time and space. There are, however, variations in the type of molecules recruited to the rings and in the way the cytoskeleton is organized depending on the cell pair involved: T-cell / B-cell; T-cell dendritic cell; B-cell / dendritic cell; killer T-cell / target cell, etc.

ZAP-70 is an indispensable link in signal transmission

Research scientists at the Institut Curie have chosen to take a B-cell as an antigen-presenting cell and to study its interaction with a T-cell. Using videomicroscopy, they have compared ZAP-70-expressing cells with cells in which ZAP-70 is either lacking or altered.

They have shown that ZAP-70 is essential for the correct unfolding of the events that occur within the T-cell. ZAP-70 participates in guiding the signaling molecules towards the immune synapse. The absence of ZAP-70 does not disrupt the general organization of the rings, that is the gathering of the membrane molecules and the positioning of surface molecules at the synapse. In contrast, intracellular events are highly dependent on its presence, and if ZAP-70 is absent the microtubule network does not orientate correctly and some signaling molecules do not accumulate in the synaptic zone.

Apart from a better understanding of the molecular basis of this immune deficiency, this work has more accurately identified the events occurring when immune cells touch and communicate. ZAP-70 is an indispensable link in the cascade of signals directed towards the nucleus, which culminate in activation of the T-cell.

Institut Curie researchers are now seeking to understand how ZAP-70 controls the reorientation of the microtubules towards the synapse and to analyze the role of the antigen-presenting cell in ring formation.

“In the immune synapse, ZAP-70 controls T-cell polarization and recruitment of signaling proteins but not formation of the synaptic pattern”