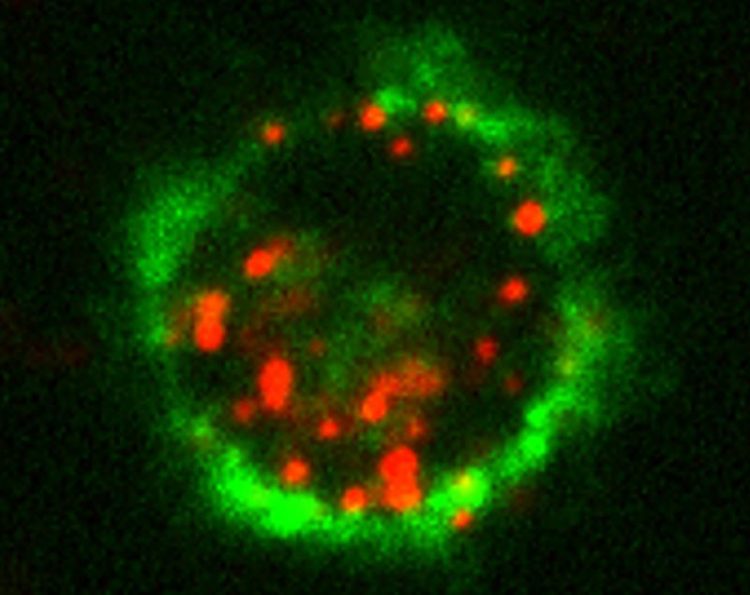 Researchers at the Max Planck Institute of Colloids and Interfaces in Potsdam developed targeted nanoparticles that are taken up by certain immune cells of the human skin. These so-called Langerhans cells coordinate the immune response and alert the body when pathogens or tumors occur.

The skin is a particularly attractive place for the application of many drugs that affect the immune system, as the appropriate target cells lie directly beneath the skin. These Langerhans cells are able to elicit an immune reaction in the entire body of the patient after local application of an active substance.

Langerhans Cells – Experts of pathogen defense
To develop a targeted drug delivery system, which guides drugs directly to Langerhans cells, one can make use of their natural function: as professional, antigen-presenting cells they detect pathogens, internalize them and present components of these pathogens to effector cells of the immune system (T cells).

The research team of Dr. Christoph Rademacher at the Max Planck Institute of Colloids and Interfaces has now been able to exploit the knowledge of the underlying detection mechanisms with atomic resolution: “Based on our insight how immune cells recognize sugars, we developed a synthetic, sugar-like substance that enables nanoparticles to specifically bind to Langerhans cells”, says Dr. Christoph Rademacher.

In collaboration with a scientific team from the Laboratory for Langerhans Cell Research of the Medical University of Innsbruck, nanoparticles have been developed that can be incorporated into Langerhans cells of the human skin through this interaction. The researchers thus lay the foundation for further developments, for example to deliver vaccines directly through the skin to the immune cells.

“Imagine avoiding needles for vaccination in the future or directly activating the body’s immune system against infections and maybe even cancer”, adds Dr. Christoph Rademacher. Langerhans cells are responsible for activating the immune system systemically. Based on these findings, it may be possible in the future to develop novel vaccines against infections or immunotherapies for the treatment of cancer or autoimmune diseases.

The starting points for this work were the pioneering contributions from Ralph M. Steinman (Nobel Prize 2011) and other scientists who showed the potential of dendritic cells. Langerhans cells are one subset of these cells and are able to trigger an immune response. These findings were subsequently refined for use in cancer therapy.

It has been shown that an immune response can be achieved via artificially introduced antigens. Later work confirmed these findings and also demonstrated that human Langerhans cells are also able to activate the immune system, which is particularly interesting for skin vaccination. Targeted delivery of immunomodulators to Langerhans cells would thus be desirable.

However, this is often hindered or even prevented by the complex environment of the skin, especially by competing phagocytes in this tissue, such as macrophages. Consequently, pharmaceuticals not taken up by the Langerhans cells, but internalized into bystander cells may lead to unwanted side effects.

Based on insights on the interaction between Langerin and its natural sugar ligands Christoph Rademacher and his team developed a synthetic ligand, which binds specifically to the receptor on Langerhans cells. For this purpose, synthetic sugars were produced in the laboratory and their interactions with the receptor were examined by nuclear magnetic resonance spectroscopy. With this method the researchers were able to determine which atoms of the ligand interact with which parts of the receptor.

By using this structure-based approach they found out that a compound can be anchored and tested on these nanoparticles. These particles are liposomes, which have been used for many years in the clinic in the absence of such targeting ligands as a carrier for various drugs. The difference with existing systems is that the sugar-like ligand now allows specific binding to Langerhans cells.

The investigations on these immune cells were carried out in collaboration with the research group of Assoz. Prof. Patrizia Stoitzner at the Langerhans Cell Research Laboratory of the Medical University of Innsbruck. Together they could show that the specific uptake of liposomes is possible even in the complex environment of human skin. The scientists used different methods such as flow cytometry and confocal microscopy for their findings.

These liposomal particles may now provide a common platform for researchers at the MPI of Colloids and Interfaces to work on the development of novel vaccines in the future.