On the way to green ammonia 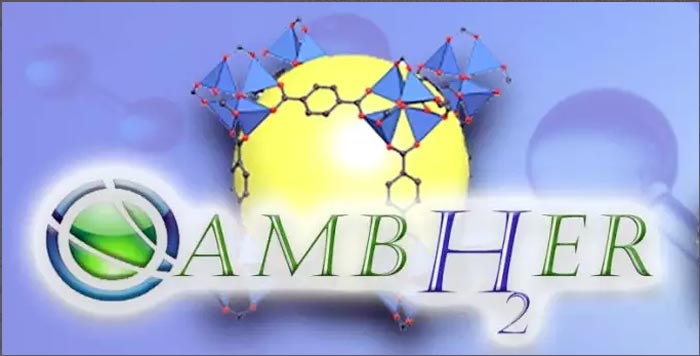 A greener synthesis of ammonia is the goal of the Ambh2er project.
Graphik: Ambh2er

Researchers of the Max-Planck-Institut für Kohlenforschung participate in an international project.

Two scientists Claudia Weidenthaler and Ezgi Onur Sahin of the Max-Planck-Institut für Kohlenforschung are part of the international “Ambh2er” project. The goal of this project is a greener synthesis of ammonia. For their work they are funded by the EU.

There are not many chemicals as often synthesized as Ammonia. The substance, which consists of hydrogen and nitrogen, is used primarily for the production of fertilizers. However, scientists are convinced that ammonia can be used for completely different things: for the chemical storage of hydrogen, for example – which many see as the fuel of the future. How can the desired storage medium – ammonia – be obtained as cheaply and sustainably as possible?

The new international research project “Ambh2er” (Ammonia and MOF based Hydrogen for Europe), in which the Max-Planck-Institut für Kohlenforschung in Mülheim an der Ruhr is also involved, is working on new ways to synthesize ammonia. “For the established Haber-Bosch process, developed by Fritz Haber and Carl Bosch at the beginning of the 20th century, high temperatures and enormously high pressures are required,” says Dr. Claudia Weidenthaler, group leader at the MPI and project manager at Ambh2er. The new project now wants to design new catalysts to make the synthesis of ammonia run at less than 20 bar and at less than 250 degrees Celsius. “That would mean an enormous energy saving,” explains Dr. Weidenthaler.

For that ambitious project, new catalysts are needed – molecular tools that accelerate a reaction or set it in motion without being consumed. “The classic Haber-Bosch process uses catalysts based on iron. We know that this works,” explains Claudia Weidenthaler. She and her colleagues now want to find completely different approaches, tools with different modes of operation.

This is where the researchers from Mülheim come on stage: Claudia Weidenthaler and Dr. Ezgi Onur Sahin, a postdoc at the institute, will help to understand how the newly developed catalysts work – by looking at what happens to the molecules during the course of a reaction. To do this, they will conduct diffraction experiments, which provide detailed insight into the behavior of the catalysts. “This is a challenge as we will be dealing with completely different catalysts,” says Claudia Weidenthaler. An individual reaction environment has to be created for each catalyst being studied. This can be done either with the equipment at the institute, or at large-scale research facilities such as the German Electron Synchrotron (DESY) in Hamburg.

The Ambh2er project with its 16 partners from science and industry from six European countries is scheduled to run for four years. The researchers of the MPI will be involved for three years. Claudia Weidenthaler and Ezgi Onur Sahin will receive a funding of roughly 300,000 euros from the European Union.

The project wants to contribute to the objectives of the European Green Deal towards making the European Union (EU) climate neutral in 2050. According to the partners it will play an important role in addressing some of the key challenges facing today’s global society, such as the cost of energy, energy security and climate change. It will not only reduce the EU’s energy dependence, but also make its energy system more resilient.