“Number sense” arises from the recognition of visible objects 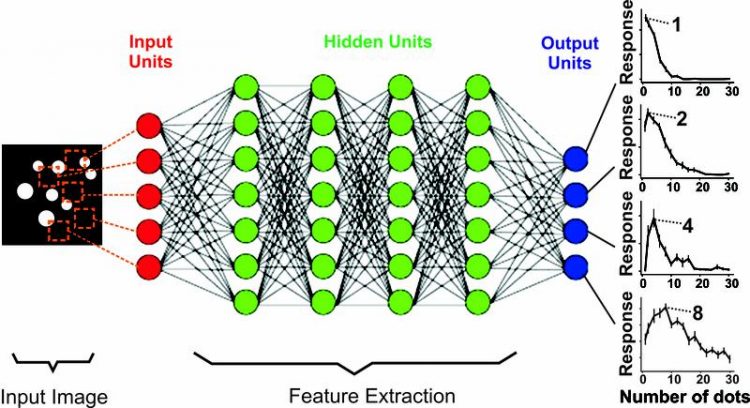 In this deep-learning neural network - trained only via the correct assignment of photos - artificial neurons formed spontaneously which were attuned to various preferred numbers. Image: Andreas Nieder

Humans and animals have a “number sense,” an inborn ability to register the number of objects in a scene. The neural basis of this ability is believed to be what are called the number neurons, which respond to certain numbers and have been found in both human and animal brains.

Researchers have long wondered whether these number neurons are formed in the brain merely by the ability to see – and if so, how. Now, a team of researchers headed by Professor Andreas Nieder at the University of Tübingen’s Institute of Neurobiology has investigated the origins of number sense using an artificial neural network.

The results indicate that it is created spontaneously by the visual system, without any experience in counting. The study has just been published in the latest edition of Science Advances.

The researchers started out by training an artificial “deep learning” network to recognize pictured objects such as tennis balls, necklaces, spiders and dogs. “The network model is based on an architecture structured like the early developmental stage of the human visual cortex,” Andreas Nieder explains.

“It has been discovered there that nerve cells work together in different hierarchical levels to enable vision.” The artificial network learned to recognize objects on the basis of 1.2 million images which were classified into one thousand categories. After this training the network was able to classify thousands of new images with a high proportion of success.

The network is in two parts. One of these extracts the object’s characteristics from the images and transforms these into an abstract representation; the second part sorts the object into a category on the basis of probability. “We separated the two network parts and to the first part we presented not photos but simple dot patterns of one to 30 dots,” Nieder says.

In the following cycles of the experiment, the patterns were repeated with varying dot patterns and densities. Then the researchers analyzed whether the network’s artificial neurons reacted to the same number of points independently of other characteristics.

“Almost ten percent of the artificial neurons had each specialized in a certain number, although the network was never trained to differentiate between numbers. The network had spontaneously developed a sense of numbers,” says Nieder.

Furthermore, the artificial neurons’ responses resembled that of real number neurons in animals and humans. “Number sense does not seem to depend on a specific, specialized area of the brain, but rather on neural networks formed by vision. This now makes it possible to explain why even newborns or untrained, wild animals have a number sense,” Nieder explains.