Nonstop Tranport of Cargo in Nanomachines 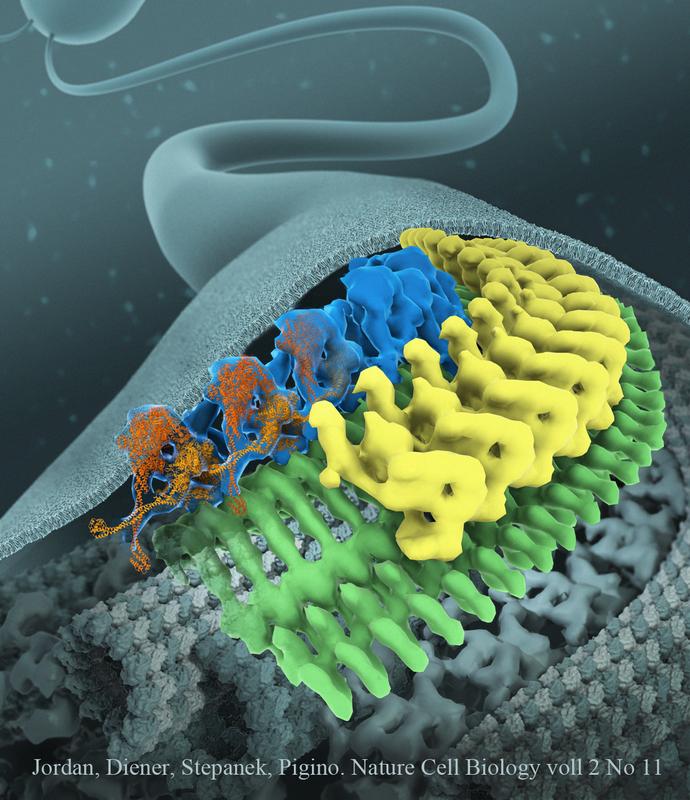 Moving around, sensing the extracellular environment, and signaling to other cells are important for a cell to function properly. Responsible for those tasks are cilia, antenna-like structures protruding from most vertebrate cells.

Whenever cilia fail to assemble correctly, their malfunctions can cause numerous human diseases. The assembly and maintenance of cilia requires a bidirectional transport machinery known as Intraflagellar Transport (IFT), which moves in train-like structures along the microtubular skeleton of the cilium.

Not only the structure of IFT trains was, so far, unknown, but also how the two types of oppositely directed molecular motors, kinesin and dynein, are prevented from interfering with each other, resulting in a smooth and constant motion of IFT trains.

The research group around Gaia Pigino at the Max Planck Institute of Molecular Cell Biology and Genetics (MPI-CBG) in Dresden solved those two unanswered questions using cryo-electron microscopy and published their findings in the journal Nature Cell Biology.

As humans, we rely on senses like hearing, seeing, tasting, or smelling in order to explore our environment. At the level of single cells, sensing our environment happens through antenna-like structures, known as cilia.

A cilium can convert light, chemical, and mechanical stimuli into molecular signals that the cell interprets and responds to. Additionally, cilia enable cells to communicate and move.

These sensory, signaling, and motility functions of cilia explain why their malfunctions can cause such a wide range of human diseases, including retinal degeneration, polycystic kidney disease, Bardet-Biedl syndrome, or congenital heart disease. Given this crucial role, it is critical for the cilium to assemble properly.

The cilium self-organizes out of numerous components, which are transported on little molecular machines called IFT trains. These trains move along the microtubular skeleton of the cilium and deliver molecular building blocks to the growing tip of the cilium before they head back to the cell body.

This is the fastest and most efficient transport system ever observed inside cells. In 2016, the lab of Gaia Pigino has discovered that cells prevent collisions during IFT by positioning trains that go in opposite directions on different microtubule rails.

Still, some questions remained after their study from 2016: How exactly does the molecular structure of IFT trains look like? How are the two types of IFT molecular motors, kinesin and dynein, regulated?

Those motor proteins are pulling the IFT train along the tracks: while kinesins bring cargo-loaded trains to the tip of the cilium, dyneins pull trains back to the cell body. Mareike Jordan, the first author of the study, explains:

“We didn’t know how dynein was able to get to the tip of the cilium without pulling the train in the opposite direction. This would lead to a tug-of-war competition between dyneins and kinesins, leading to non-smooth transport. By finding out how trains moving towards the ciliary tip are structured, we were able to reveal how dyneins are loaded onto trains as cargoes. Two mechanisms prevent a tug-of-war: dyneins are carried piggyback on IFT trains to be held distant from the microtubule rail and their legs are crossed to impair walking. Once at the ciliary tip, dyneins are released, get activated and used to pull trains back towards the cell body.”

The key technique enabling these discoveries was cryo-electron microscopy (cryo-EM), a method that uses electrons, instead of light, to image fast-frozen biological samples, such as proteins in their cellular environment, and obtain 3D models of their molecular structure.

“With the cryo-EM here at the MPI-CBG, we were able to visualize the intraflagellar transport machines in their natural context inside the cell”, says Gaia Pigino, who oversaw the study. She concludes: “This study reveals important mechanisms cells require for robust ciliary assembly. Our work on the molecular structure and function of the IFT machinery is important to understand the many cilia-related human pathologies.”