New compounds could be used to treat autoimmune disorders 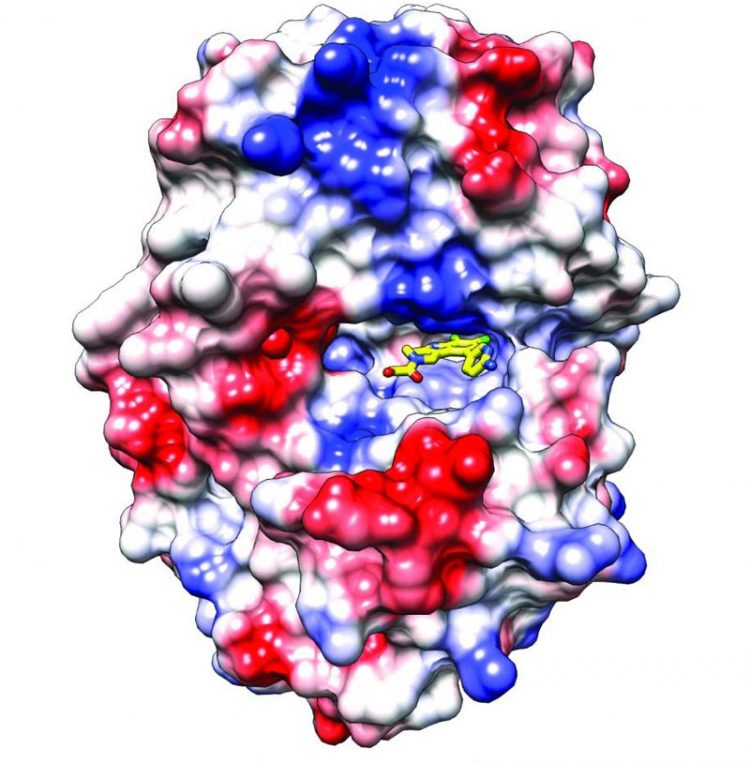 Newly-developed molecules bind to a key enzyme pocket to inhibit its activity, and possibly prevent autoimmune responses. Credit: Laboratory of RNA Molecular Biology at The Rockefeller University Usage Restrictions: Image may be used to illustrate the research described in the accompanying release.

In a new report in Nature Communications, researchers in the laboratory of Thomas Tuschl describe their development of small molecules that inhibit one of the main enzymes implicated in misguided immune responses. This research could lead to new treatments for people with certain autoimmune disorders and, more broadly, sheds light on the causes of autoimmunity.

In eukaryotes, including humans, DNA typically resides in a cell's nucleus, or in other sequestered organelles such as mitochondria. So if DNA is found outside of these compartments–in the cell's cytosol–the immune system goes into high alert, assuming the genetic material was leaked by an invading bacterium or virus.

In 2013, researchers discovered an enzyme called cyclic GMP-AMP synthase, or cGAS, that detects and binds to cytosolic DNA to initiate a chain reaction–a cascade of cellular signaling events that leads to immune activation and usually ends with the destruction of the DNA-shedding pathogen.

Yet, cytosolic DNA isn't always a sign of infection. Sometimes it's produced by the body's own cells–and cGAS does not discriminate between infectious and innocuous DNA. The enzyme will bind to perfectly harmless genetic material, prompting an immune response even in the absence of an intruder.

“There is no specificity. So in addition to sensing foreign microbial DNA, cGAS will also sense aberrant cytosolic DNA made by the host,” says postdoctoral associate Lodoe Lama. “And this lack of self versus non-self specificity could be driving autoimmune reactions.”

Since the discovery of cGAS, researchers in the Tuschl laboratory have sought to understand its potential clinical relevance. If autoimmune disorders are the result of an erroneously activated immune system, then perhaps, they believe, a cGAS inhibitor could be used to treat these conditions.

Until now, no potent and specific small-molecule compound existed to block cGAS in human cells, though the researchers previously identified one that can do the job in mouse cells. Hoping to fill this gap, Tuschl's team collaborated with Rockefeller's High-Throughput and Spectroscopy Resource Center to scan through a library of almost 300,000 small molecules, searching for one that might target human cGAS.

Through their screen, the researchers identified two molecules that showed some activity against cGAS–but this result was just the beginning of a long process towards developing an inhibitor that might be used in a clinical setting.

“The hits from library compounds were a great starting point, but they were not potent enough,” says Lama. “So we used them as molecular scaffolds on which to make improvements, altering their structures in ways that would increase potency and also reduce toxicity.”

Working with the Tri-Institutional Therapeutics Discovery Institute, the researchers modified one of their original scaffolds to create three compounds that blocked cGAS activity in human cells–making them the first molecules with this capability. Further analysis by researchers at Memorial Sloan Kettering Cancer Center revealed that the compounds inhibit cGAS by wedging into a pocket of the enzyme that is key to its activation.

The compounds are now being further optimized for potential use in patients, with an initial focus on treatment of the rare genetic disease Aicardi-Goutières syndrome. People with this condition accumulate abnormal cytosolic DNA that activates cGAS, leading to serious neurological problems. A drug that blocks the enzyme would therefore be of tremendous therapeutic value to those with the disease, who currently have few treatment options.

“This class of drug could potentially also be used to treat more common diseases, such as systemic lupus erythematosus, and possibly neurodegenerative diseases that include inflammatory contributions, such as Parkinson's disease,” says Tuschl.

Further, the researchers believe that these compounds could serve as practical laboratory tools.

“Scientists will now have simple means by which to inhibit cGAS in human cells,” says Lama. “And that could be immensely useful for studying and understanding the mechanisms that lead to autoimmune responses.”