Nanotechnology: Putting a nanomachine to work 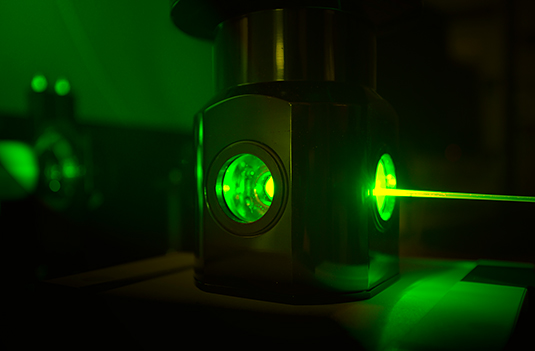 Molecular motors are chemical compounds that convert energy into directed motions. For example, it is possible to cause a substituent attached to a specific chemical bond to rotate unidirectionally when exposed to light of a certain wavelength. Molecules of this sort are therefore of great interest as driving units for nanomachines.

However, in order to perform useful work, these motors must be integrated into larger assemblies in such a way that their mechanical motions can be effectively coupled to other molecular units. So far, this goal has remained out of reach.

LMU chemist Dr. Henry Dube is a noted specialist in the field of molecular motors. Now he and his team have taken an important step towards achievement of this aim.

As they report in the renowned journal Angewandte Chemie, they have succeeded in coupling the unidirectional motion of a chemical motor to a receiver unit, and demonstrated that motor can not only cause the receiver to rotate in the same direction but at the same time significantly accelerate its rotation.

The molecular motor in Dube's setup is based on the molecule hemithioindigo, which contains a mobile carbon double bond (-C=C-). When the compound is exposed to light of a specific wavelength, this bond rotates unidirectionally.

“In a paper published in 2018, we were able to show that this directional double bond rotation could be transmitted by means of a molecular 'cable' to the single carbon bond rotation of a secondary molecular unit.” says Dube. “This single bond itself rotates randomly under the influence of temperature fluctuations. But, thanks to the physical coupling between them, the unidirectional motion of the light-driven motor is transmitted to the single bond, which is forced to rotate in the same direction.”

“This experiment enabled us to confirm that the motor really does determine the rate of rotation of the single bond – and in fact increases it by several orders of magnitude,” Dube explains.

Taken together, these results provide unprecedentedly detailed insights into the mode of operation of an integrated molecular machine. In addition, the experimental setup allowed the authors to quantify the potential energy available to drive useful work, thus yielding the first indication of how much work can effectively be done by a single molecular motor under realistic conditions.

“Our next challenge will be to demonstrate that the energy transmitted in this system can indeed be used to perform useful work on the molecular scale,” says Dube.