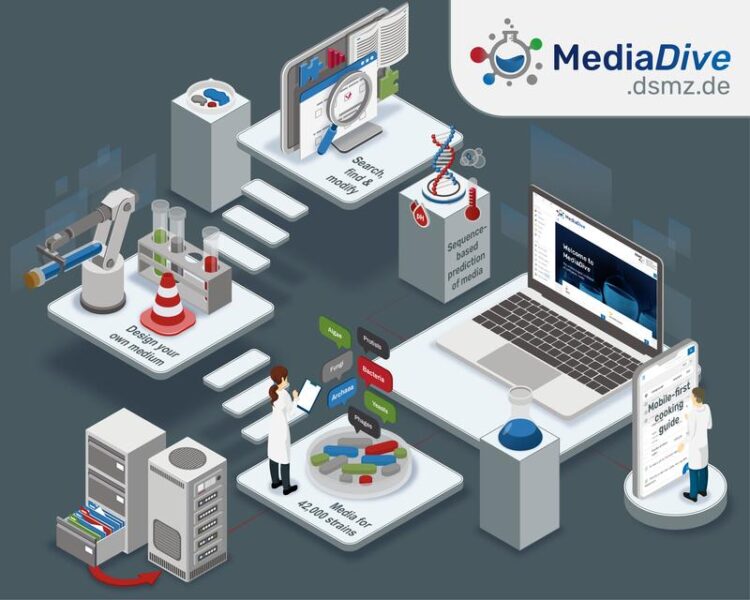 DSMZ publishes unique database for the cultivation of microorganisms.

Researchers at the Leibniz Institute DSMZ-German Collection of Microorganisms and Cell Cultures GmbH in Braunschweig, Germany have published a freely accessible database for growth media of microorganisms. The content and functions of this worldwide unique database – MediaDive (https://mediadive.dsmz.de/) – are explained by the researchers in their article published in the renowned journal Nucleic Acids Research.

Microorganisms such as bacteria and fungi are the basis for life and survival on Earth. Despite this, it is estimated that only one percent of existing microorganisms have been identified and characterised to date. One of the reasons for this is that many microorganisms do not grow in the laboratory and thus cannot be studied. This is where the novel database MediaDive comes in.

The data for this originates from the linked DSMZ database LPSN (List of Prokaryotic names with Standing in Nomenclature), among others. In addition, researchers can carry out a search for ingredients and their concentrations using the Medium Finder.

“It will be a great benefit for the research community when more bioresource collections, but also individual researchers, were to deposit their medium recipes in MediaDive, in order to support the cultivation of previously uncultivable microorganisms,” wishes first author Dr. Julia Koblitz, biologist and database developer at the DSMZ. So far, the cultivation media of other bioresource centres such as the Japanese Collection of Microorganisms and the British Culture Collection of Algae & Protozoa have already been integrated, and more are to follow. The database, which has been further extended in this way, is intended to help predict new cultivation media with the use of artificial intelligence.

About the Leibniz Institute DSMZ
The Leibniz Institute DSMZ-German Collection of Microorganisms and Cell Cultures is the world’s most diverse collection of biological resources (bacteria, archaea, protists, yeasts, fungi, bacteriophages, plant viruses, genomic bacterial DNA as well as human and animal cell lines). Microorganisms and cell cultures are collected, investigated and archived at the DSMZ. As an institution of the Leibniz Association, the DSMZ with its extensive scientific services and biological resources has been a global partner for research, science and industry since 1969. The DSMZ was the first registered collection in Europe (Regulation (EU) No. 511/2014) and is certified according to the quality standard ISO 9001:2015. As a patent depository, it offers the only possibility in Germany to deposit biological material in accordance with the requirements of the Budapest Treaty. In addition to scientific services, research is the second pillar of the DSMZ. The institute, located on the Science Campus Braunschweig-Süd, accommodates more than 82,000 cultures and biomaterials and has around 200 employees. www.dsmz.de

The Leibniz Association
The Leibniz Association connects 97 independent research institutions that range in focus from the natural, engineering and environmental sciences via economics, spatial and social sciences to the humanities. Leibniz Institutes address issues of social, economic and ecological relevance. They conduct knowledge-driven and applied basic research, maintain scientific infrastructure and provide research-based services. The Leibniz Association identifies focus areas for knowledge transfer to policy-makers, academia, business and the public. Leibniz institutions collaborate intensively with universities – including in the form of “Leibniz ScienceCampi” – as well as with industry and other partners at home and abroad. They are subject to a transparent, independent evaluation. Because of their importance for the country as a whole, the Leibniz Association Institutes are funded jointly by Germany’s central and regional governments. The Leibniz Institutes employ around 20,500 people, including 11,500 researchers. The financial volume amounts to 2 billion euros. www.leibniz-gemeinschaft.de