Home / Life Sciences / In monogamous species, a compatible partner is more important than an ornamented one
19.03.2018

In monogamous species, a compatible partner is more important than an ornamented one 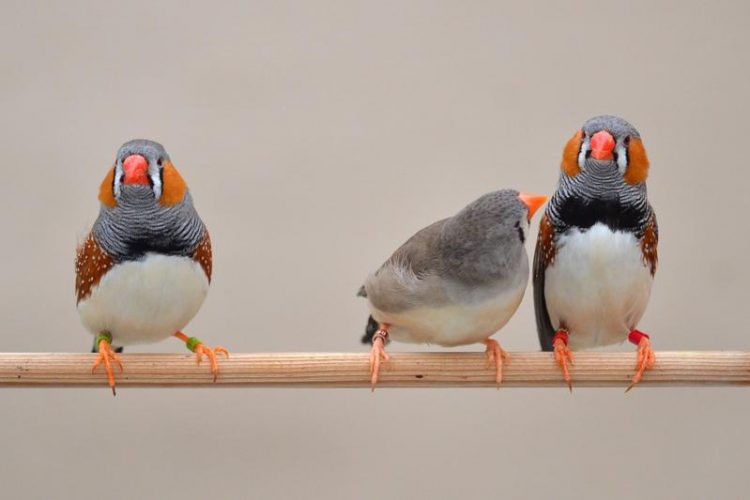 More than 35 years ago, a study reported that leg bands of certain colours have major effects on the attractiveness of an individual and hence on mate choice. The idea sounds plausible: zebra finch males decorated with red bands are more attractive to females than males wearing green bands, because a red band amplifies the ornamental effect of the male’s beak, which is coloured deep red.

Since the first claim, 39 studies have been published in which zebra finch males had been fitted with such colour bands. Twenty-three studies confirmed that red-banded males are superior to green-banded ones, while an additional eight studies found at least some effect on one of the “success” parameters studied.

The current study from the Department of Behavioural Ecology and Evolutionary Genetics at the Max Planck Institute for Ornithology in Seewiesen analysed the results of eight experiments in which the researchers quantified reproductive success of a total of 730 colour-banded individuals from four different captive populations.

This sample size exceeds the combined sample of all 23 publications that clearly supported the “colour-band effect” hypothesis. The researchers, however, did not find any effect of band colour on reproductive success of either males or females across all populations.

“The large sample size clearly showed that there is no effect at all”, says Wolfgang Forstmeier, who led the study. “A closer look at the statistics of the previously published studies revealed that positive results were only reported when sample sizes were small, suggesting that the results may be artefacts.”

For the researchers in Seewiesen, this finding did not come as a big surprise: a previous study from the same group found that female zebra finches chose compatible partners, and not necessarily the ones that were highly ornamented.

As zebra finches are socially monogamous and nearly every female ends up with exactly one male partner, strong preferences for highly ornamented individuals may not be favoured by selection. This may be because the costs of competition can easily exceed the benefits of choosiness when only one female can get the most beautiful male in the end.

„The pronounced individuality of mate preferences in zebra finches clearly does not result in strong selection for attractive ornaments“, says Bart Kempenaers, director of the department. Instead, brood care may be optimal if partners choose traits that ensure behavioural compatibility rather than ornamental traits.