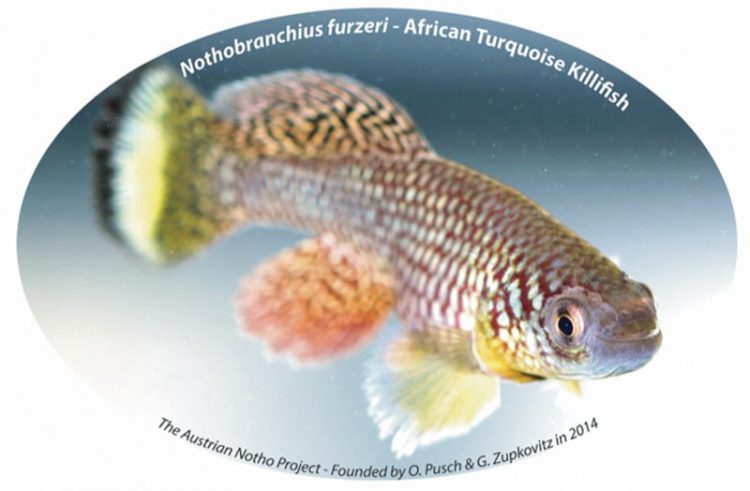 An important aging mechanism, a permanent reduction of histone deacetylases, was recently identified in the african Killifish, N. furzeri. The Austrian Northo Project

People have long been dealing with questions about the mechanisms that make our body cells age and how to counteract these mechanisms. Due to their function in cell cycle regulation, histone deacetylases, HDACs, are considered to play an essential role in the cellular aging process and in the development of neurodegenerative diseases.

A research team around Sabine Lagger from the Unit of Pathology of Laboratory Animals of the University of Veterinary Medicine Vienna, in collaboration with Gordin Zupkovitz and Oliver Pusch from the Medical University of Vienna analysed these connections and confirmed a clear mechanism in the extremely short-lived killifish from the onset of embryogenesis until the last phase of life.

The short-lived turquoise killifish, Nothobranchius furzeri, has been an emerging model organism in aging research for several years. Since 2014, the Medical University of Vienna has been conducting research into this species in its Killifish Facility, which constitutes the only one of its kind in Austria.

The species’ short lifespan of about four months is not the only argument, as N. furzeri also shows clear signs of aging such as dementia and cancerous lesions. Additionally a fully annotated genome is available. This “comprehensive package” enables analyses of cellular aging processes, virtually in fast forward motion.

“We analysed the expression of histone deacetylases because these proteins are often related to aging processes,” explained Lagger. HDACs are involved in mechanisms how the genome is transcribed in a particular moment. The DNA does not exist freely in cells but is wrapped around complex protein structures. It is, in a way, strategically packed.

“Some parts can be modified by certain chemical modifications so that specific genes can be transcribed or not. Which parts are accessible or not depends on external factors, such as environmental conditions, stress, or endogenous processes, such as aging,” said the lead author.

The analyses done by the team showed that the expression levels of HDACs was constantly downregulated in aging killifish. This decrease of available HDACs resulted in the increasing production of the cell cycle inhibitor protein p21. The researchers also confirmed this dynamic in a mammalian animal model. “The HDAC-p21 connection was mirrored in the mouse. This even allows us to conclude that there is an evolutionarily conserved mechanism of cellular aging,” said Lagger.

Epigenetic background could open doors for an active compound strategy

Furthermore, the availability of HDACs and the connection with the aging process is interesting because it influences the epigenetic regulation of the cell cycle. “In contrast to genetic mutations in the DNA sequence, epigenetic changes are reversible. This could be an approach for the development of active compounds able to inhibit the described mechanism,” concludes Lagger.