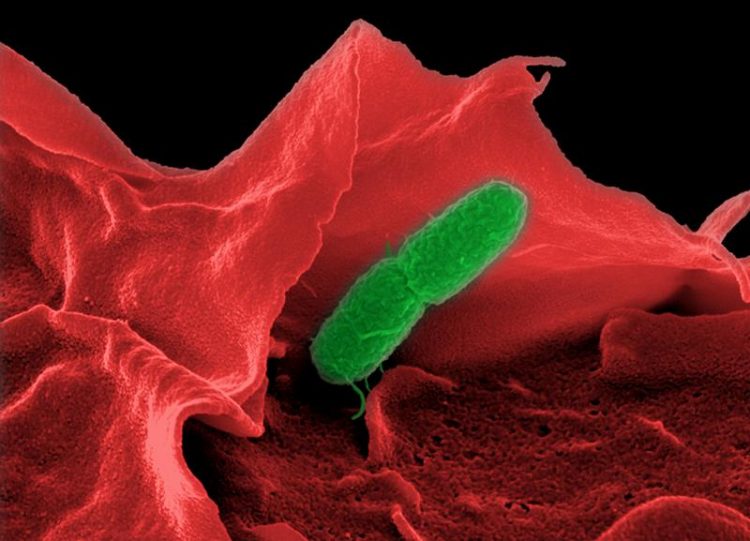 Scientists studying infections used to focus mainly on the direct interaction of the immune system with pathogens, but have since moved on to look more closely at the interactions that go on between microbiota, immune system and pathogen. Using mouse models, researchers from the Helmholtz Centre for Infection Research (HZI) recently elucidated a relationship between gut microbiomes of various compositions and the susceptibility to Salmonella infections.

In their study, the scientists from Braunschweig identified several bacterial families that have a protective effect against Salmonella. The researchers also elucidated the immune mechanism in the mucosa of the gut that is regulated by the protective bacterial families. Published in Cell Host & Microbe, the results of the study of the HZI scientists are an important step towards a better understanding of the interactions of the triad of microbiota, immune system and pathogen.

Trillions of microorganisms colonise the surfaces of the human body as permanent, helpful companions. The composition of the so-called microbiota, i.e. the entirety of microorganisms colonising humans and animals, varies very strongly between individuals. Aside from genetic factors, environmental influences – such as nutrition – are the causes of this diversity. The variability of the microbiota has been correlated for some years to the difference in the susceptibility of humans to intestinal infections.

“In recent years, the microbiota has become an ever more important aspect in the research on intestinal diseases. The microbiota fights pathogens in multiple ways: Firstly, the microbiota competes with pathogens for nutrients and thus prevents the colonisation of the host. On the other hand, the protection from pathogens can also be indirect through the triggering of a protective immune response of the host,” says Dr Till Strowig, who is the head of the “Microbial Immune Regulation” junior research group at the HZI. “Our study investigated the extent to which the microbiome affects the protection from infection by Salmonella.”

The researchers used a mouse model to identify those bacteria of the microbiota that contribute to the protection against Salmonella infection. In the course of this study, they subjected genetically identical mouse lines that differed only in the composition of the microbiota to a Salmonella infection. The weight loss and the survival rate of the mice during the ongoing infection were documented such that both the most sensitive mouse line and the most resistant mouse line were identified by the end of the experiment.
The researchers also used the latest high-throughput sequencing methods to study the differences in the microbial communities of these mouse lines in great detail. Especially the number of certain bacterial families (Prevotallaceae and Verrucomicrobiaceae) was found to be clearly higher in the resistant mouse line as compared to the sensitive mouse line.

Based on these insights, the researchers transplanted several of these bacterial strains to sensitive mice. In response, the mice showed a clearly increased level of protection with respect to Salmonella. “This experiment confirmed that the bacterial composition of the intestinal microbiota plays an important role in the protection from Salmonella infections. And we were able to identify the bacterial families that impart the protection,” says Strowig.

The research group also elucidated the underlying mechanism of the protection by these bacteria. It was known from previous studies of other scientists that the immune response to Salmonella involves the production of antimicrobial agents and cytokines – i.e. proteins with an effect on the growth and function of target cells – in an early phase of the immune response.

The mice harbouring the protective bacterial families produced increased amounts of the cytokine, interferon-gamma (IFNγ). This protein plays a critical role in the initiation of immune responses to bacterial pathogens.

“In order to exclude the possibility that other factors might be responsible for the increased resistance to Salmonella, we did another experiment in which we suppressed the IFNγ production by using animal lines that are unable to produce this interferon. Even when the protective bacterial cocktail was added in this experiment, no elevated level of protection was generated,” says Strowig.

Unexpected by the researchers, the fight against Salmonella takes place not only on the inside of the gut. Instead, in the case they studied, the microbiota helps the host to fight the pathogens also inside the mucosal tissue of the gut, which the salmonellae need to penetrate for infection. “So the great surprise in our results was not that there is a correlation between the composition of the intestinal microbiota and the course of disease, but the underlying mechanism,” says Strowig.

Further studies are planned to find out which of the two types of immune cells – T cells or innate lymphocytes – are more important for the response of the immune system of the intestinal mucosa. The study presented here was done in collaboration with Richard A. Flavell and Andrew L. Goodman (both Yale University, USA) as well as Marc Erhardt (HZI), Ulrich Kalinke (Twincore) and André Bleich (MHH) as local partners.

The Helmholtz Centre for Infection Research:
Scientists at the Helmholtz Centre for Infection Research (HZI) investigate the mechanisms of infections and of the defences against infections. What is it that makes bacteria or viruses pathogenic? The answer to this question is expected to be key to the development of new medications and vaccines. www.helmholtz-hzi.de