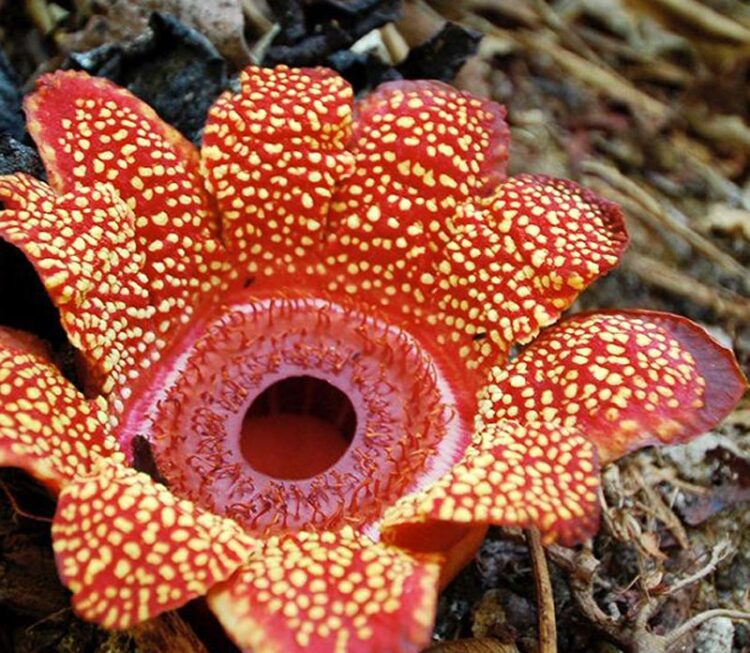 Sapria himalayana is found in Southeast Asia and its mottled red and white flower is about the size of a dinner plate.
Credit: Davis Lab/ Charles Davis

Harvard-led researchers have produced the most comprehensive genome of one of the world’s largest flowers.

On January 22 in Current Biology, a team of Harvard-led researchers presented the most complete genome yet assembled of one of the major Rafflesiaceae lineages, Sapria himalayana.

The species is found in Southeast Asia and its mottled red and white flower is about the size of a dinner plate. (It’s more famous cousin, Rafflesia arnoldii, produces blossoms nearly three feet in diameter, the largest in the world.)

The genetic analysis revealed an astonishing degree of gene loss and surprising amounts of gene theft from its ancient and modern hosts. These findings bring unique perspectives into the number and kind of genes it takes to be an endoparasite (an organism that is completely dependent on its host for all nutrients), along with offering new insights into how far the genomes of flowering plants can be altered and still remain functional.

The analysis sheds light on a species of flowers who’s evolutionary and genomic history is largely unknown because they lack a traditional body, spend most of their lives inside their hosts, and lack the machinery to perform photosynthesis (which keeps most plants alive).

What struck the group immediately was the striking degree of gene loss Sapria experienced as they abandoned their bodies and adapted to become endoparasites. Nearly half of all genes found in most flowering plants are absent in the Sapria genome. That extent of gene loss is more than four times the degree of loss in other plant parasites. Many of the genes lost include what are considered the key genes responsible for photosynthesis, which converts light into energy.

“In many ways, it’s a miracle that these plants exist today, let alone that they seem to have persisted for tens of millions of years,” said Charles Davis, who led the project and is a professor of organismic and evolutionary biology at the Faculty of Arts and Sciences and curator of vascular plants in the Harvard University Herbaria. “They’ve really jettisoned many things we identify as a typical plant yet they are deeply embedded within the plant tree of life.”

At the same time, the data demonstrated an underlying evolutionary convergence to becoming a parasite because Sapria and the parasitic plants the researchers compared them to lost many of the same types of genes despite evolving separately.

“We concluded that there is a common genomic or genetic roadmap to how plant parasites evolve,” said Cai Liming ’20, Ph.D., a researcher at the University of California, Riverside, who helped lead the study as a graduate student in the Davis Lab while at the Harvard Graduate School of Arts and Sciences.

The scientists also identified dozens of genes that came into the Sapria genome through a process called horizontal (or lateral) gene transfer instead of the traditional parent-to-offspring transmission. Basically, it means Sapria stole this DNA from their host instead of getting it passed down to them.

The researchers then reconstructed the lateral gene transfers they detected to put together a hidden history of former hosts going back millions of years.

They estimate they’ve sequenced about 40% the genome, believing that this is the core and that the remaining portions are likely repeat regions.

The research collaboration included scientists from across the country and around the world, including former students in the Davis lab and collaborators in Thailand and Malaysia. Along with Cai, researchers from Harvard included Timothy Sackton, the director of bioinformatics for the FAS Informatics Group; Brian Arnold, a former bioscientist with the group; Danielle Khost, a current bioscientist with the group; and Claire Hartmann, director of the Bauer Core Facility.

“[The project] was really an illustration of how these new sequencing technologies are really opening up the possibility of addressing questions that were just not feasible to address before, particularly in plants which have a really wide diversity of these sorts of weird genomes,” Sackton said.

The project dates back to 2004. It involved extensive fieldwork in Thailand and Malaysia and careful logistics to transport the plants. In the lab, the researchers dissected the plants and extracted their genetic materials. This involved its own slew of sensitive protocols, like making sure not to cross-contaminate genes from the parasite with those of the host. Researchers said putting together the genome was like assembling a puzzle that had millions of pieces.

When it comes to parasites, Rafflesiaceae are the stuff of nightmares. They have no roots, stems, or leaves of their own. Instead, they are invisible for most of their life, living only as a small necklace of cells inside the woody vines of their host until without warning — like the creature in the movie “Alien” — they burst out to bloom some of the largest flowers in the world. Their pungent smell of rotting meat or fruit attracts carrion flies who help pollinate these plants, allowing them to produce seeds and spread to another unsuspecting host, restarting the whole cycle.

Rafflesiaceae represent the most extreme form of parasitism known as endoparasitism. To those who study these plants, it’s one of the many things that makes them so remarkable.

“These are easily the most charismatic and strange of all flowering plants,” said Davis. “They’re just so bizarre.”