Home / Life Sciences and Chemistry / From cell walls to photosynthesis
16.11.2022

From cell walls to photosynthesis 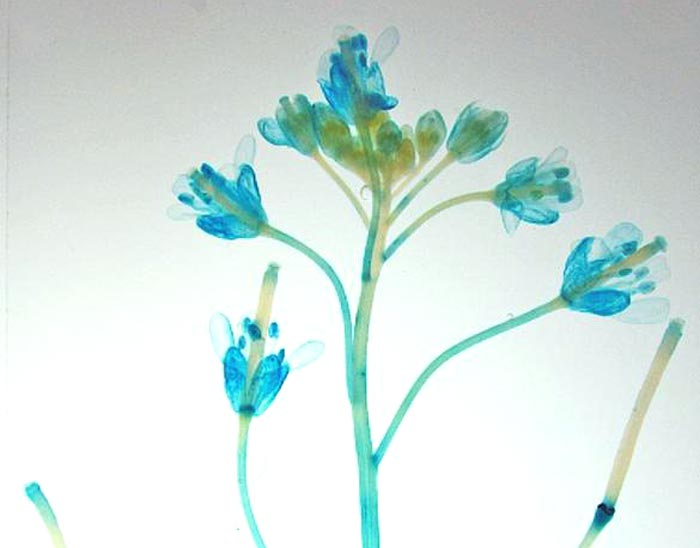 The team coupled a fluorescent protein to BICAT3 to track its activity in the plant. The blue spots show where the protein is active.
Uni Halle / Jie He

How does manganese get to where it needs to go in plants?

The protein BICAT3 is one of the most important manganese distributors in plants. If defective, this can have devastating effects on a plant’s growth; its leaves grow significantly smaller and it produces fewer seeds than usual. A team led by Martin Luther University Halle-Wittenberg (MLU) has recently uncovered a transport pathway for manganese in plants and the role that BICAT3 plays in this process. The results could lay the groundwork for improved crop growth. The study was published in the journal “Plant Physiology”.

Manganese is an important nutrient for all living creatures. The trace element is a component of enzymes, the proteins that control all the chemical reactions in cells. In humans, it plays a vital role in building connective tissue, cartilage and bones. “In plants, the enzymes that build cell walls need manganese to function. Manganese also plays a key role in photosynthesis,” explains Professor Edgar Peiter, a plant researcher from MLU. For the study, his team investigated how manganese is supplied to the enzymes responsible for building cell walls.

The researchers conducted extensive experiments on the model plant Arabidopsis thaliana. The team was able to show that the protein BICAT3 is responsible for transporting manganese to where it needs to go in plant cells. “Genes are like a blueprint for proteins. In order to investigate the role of the BICAT3 protein more closely, the corresponding gene in the plants was mutated so that the plants could no longer produce the protein,” says Peiter. This had clear consequences for the plants. “The plants were unable to compensate for the subsequent lack of manganese and displayed various growth defects. Their cell walls did not form like they normally would, and their leaves were significantly smaller than those of plants with an intact gene,” says Dr Jie He, the lead author of the study. The growth of the pollen tube was also disrupted, which meant that the plants developed fewer seeds.

In a further step, the researchers bonded BICAT3 to a fluorescent protein, so they could precisely track the protein in the cells of living plants. “BICAT3 is found in the trans cisternae of the Golgi apparatus,” says Peiter. Put simply, the Golgi apparatus is like a cell wall factory with a shipping department. Cell wall components are assembled in its cisternae from individual sugar molecules and then sent to the right address.

The study by the researchers from Halle is currently at a fundamental stage. “We can now explain the underlying mechanism of how the manganese gets to the enzymes that are responsible for cell wall synthesis,” concludes Peiter. In the future, the results could also be important for crop breeding. In initial, unpublished experiments, the team was able to evoke and observe similar effects in a cereal species.

The work was supported by the China Scholarship Council, the German Academic Exchange Service, the German Research Foundation (DFG) and by funds from the European Union.