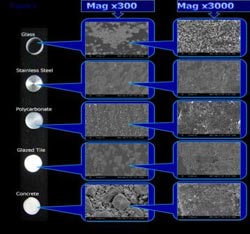 Researchers from National University of Ireland, Galway conducted a study in which they attempted to kill Salmonella biofilms on a variety of hard surfaces, using three types of disinfectant.

“We found that it was not possible to kill the Salmonella cells using any of the three disinfectants, if the biofilm was allowed to grow for seven days before the disinfectant was applied,” says Mary Corcoran, a researcher on the study. Even soaking the biofilms in disinfectant for an hour and a half failed to kill them

The impetus for the study was a European outbreak in which 160 people in 10 countries became ill with gastroenteritis (vomiting and diarrhea) from the Agona serotype of Salmonella, says Corcoran. That outbreak was traced to meat from a major food-processing facility.

“It seems that Salmonella Agona entered into the environment in the part of the facility where meat that was already cooked was being handled, and it had survived and contaminated the cooked meat,” says Corcoran. “We were interested in determining if this particular Salmonella, that caused the outbreak, might have something special about it that makes it better at surviving in the environment of a food processing facility. Was it better at forming a dense biofilm or was it more resistant to disinfectants than other Salmonella?”

The research uncovered nothing special about that specific strain.

“We found that all of the types of Salmonella we looked at were able to adopt the specialized biofilm lifestyle on all of the surfaces we looked at, including glass, stainless steel, glazed tile, and plastic, and that the biofilm of Salmonella gets more dense over time, and becomes more firmly attached to the surface,” she says.

“People need to question whether disinfectants that are promoted as killing various types of bacteria are really as effective in real life situations where biofilms can form as they are claimed to be based on experiments that do not use biofilms. A lot of the time, the disinfectant may add very little, if anything, to good cleaning and appropriate food handling practices,” says Corcoran. “There is a need for more research to define better methods for killing Salmonella biofilms.”

In the US, an estimated million-plus cases of Salmonella occur annually, with 23,000 hospitalizations and 450 fatalities reported each year, according to the Centers for Disease Control and Prevention.

A copy of the manuscript can be found online at http://bit.ly/asmtip0114e. The final version of the article is scheduled for the February 2014 issue of Applied and Environmental Microbiology.

Applied and Environmental Microbiology is a publication of the American Society for Microbiology (ASM). The ASM is the largest single life science society, composed of over 39,000 scientists and health professionals. Its mission is to advance the microbiological sciences as a vehicle for understanding life processes and to apply and communicate this knowledge for the improvement of health and environmental and economic well-being worldwide.